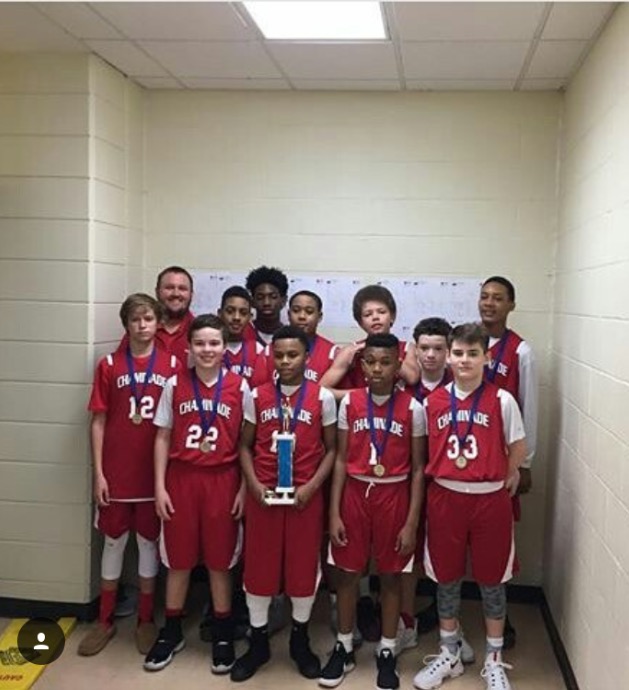 By Casen Lawrence
The Chaminade Basketball program has a very rich history in both wins and the characters that they build. The program won the Missouri State 5A Championship in the 2008-2009 season, led by Bradley Beal who is now playing for the Washington Wizards. During this season, Brad averaged an outstanding 24 points per game.

This past year, Chaminade won the State Championship, and were led by Jayson Tatum, who is currently having an amazing season at the University of Duke. Tatum is projected to be a top 10 pick in the upcoming NBA Draft.  But Jayson was definitely not the only player last year. They had a team full of players that were committed and determined to settle for nothing less than a state title. The Red Devils also had 3 division I basketball players who graduated and are now playing at a very high level.

In order for all this high school success to be possible, the basketball program focuses on teaching the foundation of Chaminade Basketball, starting with the middle school program. This goal is very evident when you look at the Chaminade 7A basketball team coached this year by Michael Derkits. “I think the middle school program is important in the formation of our basketball players. All coaches in the middle school run the basic offense and defense that Coach Bennett teaches in the high school, while still focusing on skill development,” said Coach D.  “We have a lot of talented players on the 7A basketball team, but what I am most proud about is that they play very unselfish and have continued to get better each game.”

As a part of the team, I also think that the biggest thing for us is how unselfish we are, and the bond that we have made throughout the year. We are currently 14-0 this year, with 2 games remaining.  I reached out to Mikey Lewis, a great player from last year’s championship team, who was also a part of the only team to go undefeated in a middle school season. I asked him about what it meant to him and how it felt to go undefeated. “It’s a great feeling, it shows that the whole team is focused and determined on greatness.” Lewis went on to say, “It also showed how special of a group that we had the chance to be in the future.”

I agree with Mikey. It will take dedication, determination, and focus from each of us to become great. When I showed a Guard Julius (Tripp) Conner what Mikey had said, he responded with this: “I also think that we are very talented group of kids, and we know how to play as a team, we understand the game of basketball, and most importantly, we treat each other like family.”

I asked several teammates about the bond and brotherhood that our team has built throughout the season. “We have built a great bond, and show unselfishness on and off the court.” said Guard Jaden Mcclain. Ronnel (Champ) Johnson went on to add, “I feel like we have a very strong bond, this can be seen when we go through tough times and situations, but still stick to the game plan and pick each other up.” As Ronnel mentioned, we have gone through some tough times throughout this year.

The most difficult one probably being the first half of a good game against MICDS. We were having trouble with reaching too much, and shots were not falling on the offensive end. On the other side of the ball, MICDS was shooting the lights out, and they were taking advantage of our undisciplined fouling. At the end of the half, the Rams led 24-23. “We were playing lazy defense, we did not have the best shot selection, and we were reaching on defense, not being disciplined” said forward Nate Straughter. Coach D did an amazing job getting us in shape for the second half. We came out shooting well and hit 7 threes, but most importantly, we started playing much better team defense. We ended up winning the game by a margin of 12. This game was a great example of how we can play through tough times, and continue to play hard throughout the whole game.

Throughout the season, we have become a close group of friends/brothers. It has been so much fun playing and growing as a team together, and sticking together whether times are tough, or whether times are easy. Guard Isaiah Coplen explained the team’s growth throughout the year perfectly. “We’ve all grown as teammates on and off the court. We’ve also grown as men, helping people up when they fall, and showing better sportsmanship to the opposing team.”