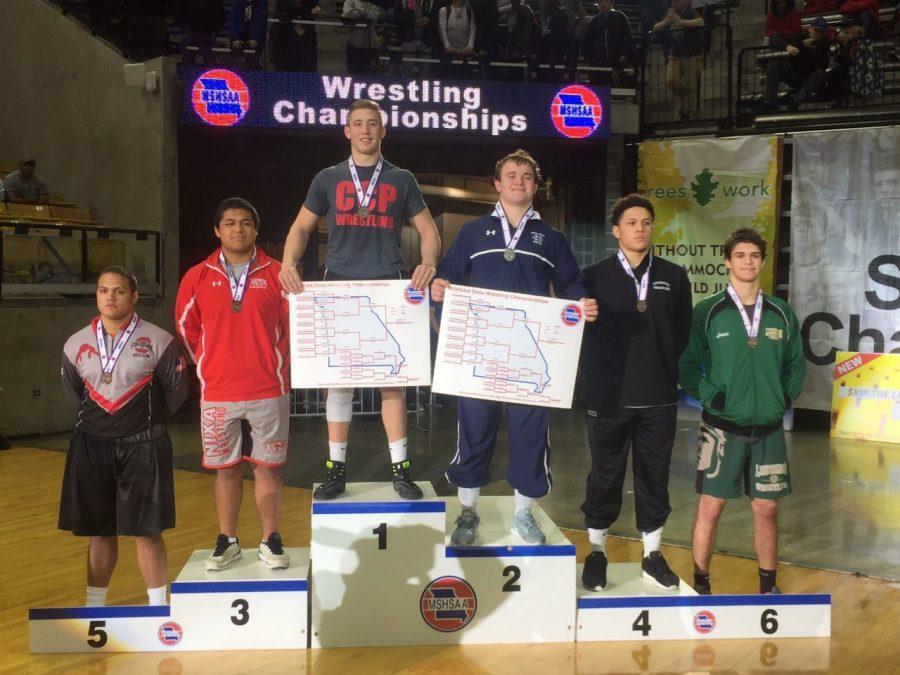 On the ground, sweat dripping off his body like a waterfall. Danny Conley feels the rubber matt, and he has his opponent’s foot. That is his only chance of victory, if he loses the foot, than the ref will call a reversal for his adversary and that will be it. The championship will end 3-2 with all of his hard work for nothing. He knows he cannot let go. The second are ticking off the clock. 5… 4… 3… 2…

Let’s rewind a little bit. Danny Conley had been a top ranked wrestler since the beginning of the season. He had worked insanely hard all year in the hopes of winning state, and now he was there. In the state finals, meeting an opponent he had already faced twice and had won 1 and lost 1. The whistle blew and Danny and his opponent put their heads together and continued to try to get an upper hand. Danny’s strategy going into the match was to stay in good position for the whole match and to stay tough. He also said that he needed to wear his opponent out. Danny did a great job of this, the match did not have a lot of action, but you could see how strenuous being in a good position all match would be, and Danny forced his opponent to respect his ability and that wore him out. Danny and his opponent both got a point for an escape, and the match went into overtime.

The first period of overtime the score stayed 1-1. In the second period, Danny won the coin toss and chose to start on the ground, so all he had to do was stand up, and he would be in the lead, or he could have tried to reverse his opponent, and put him on the ground and get 2 points. Danny chose the safe route, and got one point for an escape. Danny was winning 2-1, and all he had prevent his opponent from getting up, and he would be the state champ. Danny did a good job, he did not let his opponent stand up. Instead, his opponent reversed Danny, and put him on the ground. The clock was almost out though. There were 3 seconds left and Danny was holding on to his opponent’s foot. If Danny lost his grip, he would lose. The final second ticked off the clock, and Danny finally could not hang on any longer. He lost his grip, and the ref called the reversal for 2 points, meaning his opponent won. 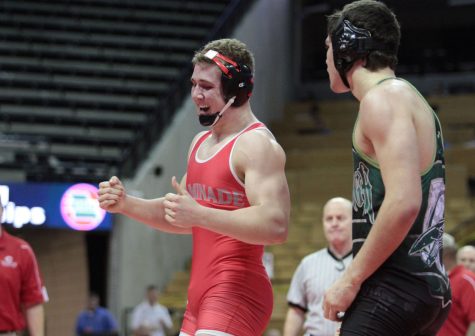 However, coach Todd Schumaker had been watching the clock the entire time, and knew that time had ran out before the opponent had completed the reversal. He ran to the table to protest. There was a whole lot of drama, parents yelling and coaches and players protesting. The director of tournament had to come over to the table and sort out the dispute. Both coaches from Chaminade were protesting for Danny very lividly. Finally, the ref went to the middle of the matt, and raised Danny’s hand. Danny ran to Coach Schumaker and embraced him in a great bear hug. Danny was officially the first state champion wrestler in Chaminade history. I asked Danny what it was like to be the first Chaminade wrestler to win state, he said, “It really felt great.  After watching all my role models growing up [Buddy Conley (My brother), Zach Wilhelm] not be able to achieve a state title, winning state felt great to finish what they started.  The support from the Chaminade family throughout the tournament was overwhelming and I can’t thank everyone enough”. Anybody who has ever met Danny knows how hard he trains. He is in the wrestling and weight room constantly. He works harder than anybody and his sportsmanship and character are top notch. Danny is a true competitor that will do anything to win, and next year he will look to defend his state title. Congratulations Danny, the entire Chaminade family is proud of you.