Coach D and his “Derktionary” 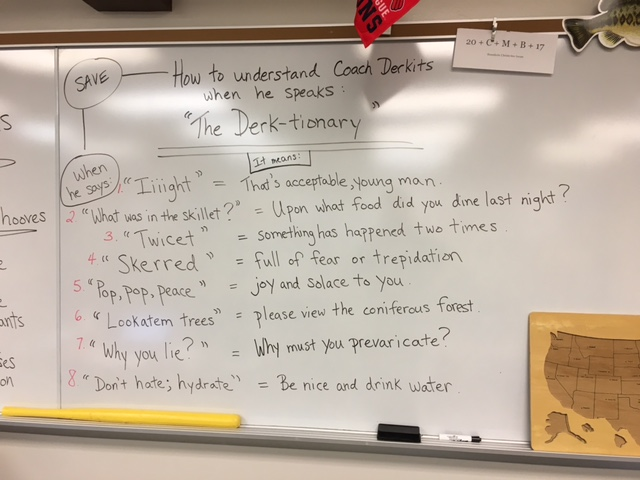 By Quin Rizer and Conrad Hogenkamp
Coach Derkits, or simply known as Coach D by 8th graders, has quickly become one Chaminade’s most iconic teachers through the quirks of his class. These quirks—how he leads prayers and takes attendance, for example—make his class one of the most interesting and fun in the Middle School.

Coach D’s attendance taking is one that is hard to replicate. He has a nickname for every single 8th grader, and the students in his mentor group. My nickname is “The Eskimo”, after the song “The Mighty Quinn” by Manfred Mann. He often names nicknames after restaurants that the student likes, his middle name, or even siblings. It truly amazing how he can remember each individual nickname, and how each nickname comes from a separate source.

Coach Derkits is a very complex person with an intricate prayer system. We cannot precisely find out what is going on inside his head; but his prayers normal consists of a Latin introduction  of “in the name of the father, the son and the holy spirit” (In nomine patri et filli et spirictus sancti). Following that, the middle portion of the prayer would consist of either a Latin prayer or an English spoken song. Most of the songs sung in the prayer could be found in church. For example, a very common one is the “Fly like a bird,” which he accompanies with hand gestures.  His Latin prayers normally consist of “Ave Maria.”  Clearly, his class is very spiritual.

Another facet of the amazing personality of Coach Derkits is his unique vocabulary, which Mr. Gauvain has come to label, “The Derktionary.” It’s helpful to know his slang in order to fully comprehend the genius that he speaks. A common phrase is simply, “Skillet?”  You should answer with what you had for dinner the previous night. Responding with a unique restaurant often influences your attendance nickname.  “Nah, La Familia” is a common phrase meaning “You probably shouldn’t do that.”  It takes a little bit to fully comprehend the Coach D language, so Mr. Gauvain has been creating a visual “Derktionary” for any students that are struggling to understand what Coach D is saying.

Coach Derkits is quite an interesting gym teacher, one that makes P.E fun. His prayer and attendance start out the class in an engaging way. His “Derkitionary” allows for a challenging yet interesting conversations. I hope you have the chance to share your “skillet” with Coach Derkits.