The History that Almost Was 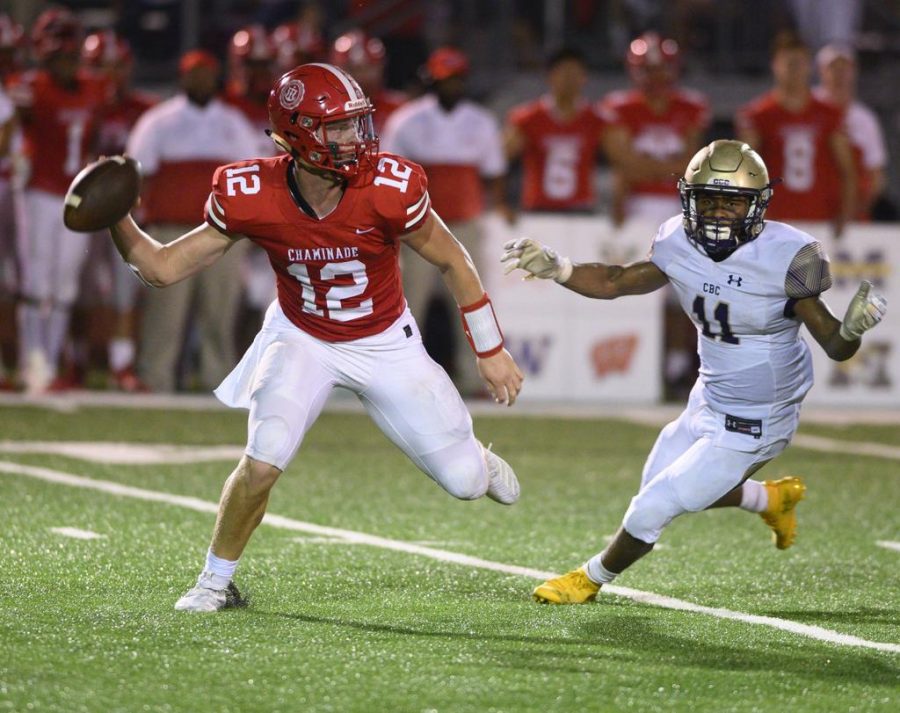 DON OLMS FIELD–During the build-up to Chaminade’s September 12th matchup with perennial powerhouse CBC, we all felt that there was bound to be magic on the field. The Red Army hyped up the players all day during classes, and everyone wanted to win.  And for most of the game, the Red Devils lived up to the hype, until CBC took a commanding lead in the third quarter and topped Chaminade 56-26 in a lopsided second half.

After this most recent loss, the Cadets extended their unbeaten steak against Chaminade to 10 years.  It is a tough stat to endure, but at the end of the day CBC was ranked 37th nationally at the time of the game, and the Red Devils were ranked in the 700’s. The Cadets have also won the state title three years in a row.

For the casual football fan, it may look like a blowout. It was a close game for the majority of the game, as the teams went back and forth. Just as one team was about to score, it seemed they would turn the ball over somehow each time. They went into the half tied at 14 apiece, and it seemed like it was going to need an eventual overtime to decide the winner.

The game was a quarterback duel to say the least, as the CBC quarterback Ayden Robinson-Wayne rushed for 270 yards, and Brady Cook (Chaminade QB) threw for 328 yards. Both stats are impressive, as each quarterback found ways to move their team down field.

“We tried our best,” Cook said, “but they got the best of us in the second half.” Brady Cook was picked off three times during the game. Two of the three picks were bad bounces that CBC’s secondary capitalized on, and the last was a route that looked to be miscommunicated.

Although the sophomore quarterback wearing the purple and gold had an impressive showing, he wasn’t the only weapon. Jordan Clay had a phenomenal night on the field as well. He rushed for 160 yards on 12 carries and had himself a few big carries. Just as the Chaminade defense would take control of Robinson-Wayne’s rushing, they would hand the ball off to clay for a big play. Even someone who doesn’t know their fair share of football, can figure out that two solid players rushing the ball is a dangerous aspect to play against.

The game sent the CBC Cadets to a solid 3-0 record and set back the Red Devils to 2-1.  Both teams continue play this week, as CBC faces off against DeSmet and Chaminade plays their homecoming game against the Griffins of Vianney, who have had the Red Devils’s number in recent years.  Chaminade’s game will be broadcast on CSPN, while CBC’s game will have a national audience on ESPNU.

It is still a long season ahead, but there’s a large change that both teams will be making a deep playoff run.  Each team is the favorite to win most of their remaining games, although CCP has a tough test against Vianney.  Vianney has won state in each of the last two years in their class, but don’t have many of the players that won those titles.  This is Chaminade’s chance to prove themselves.