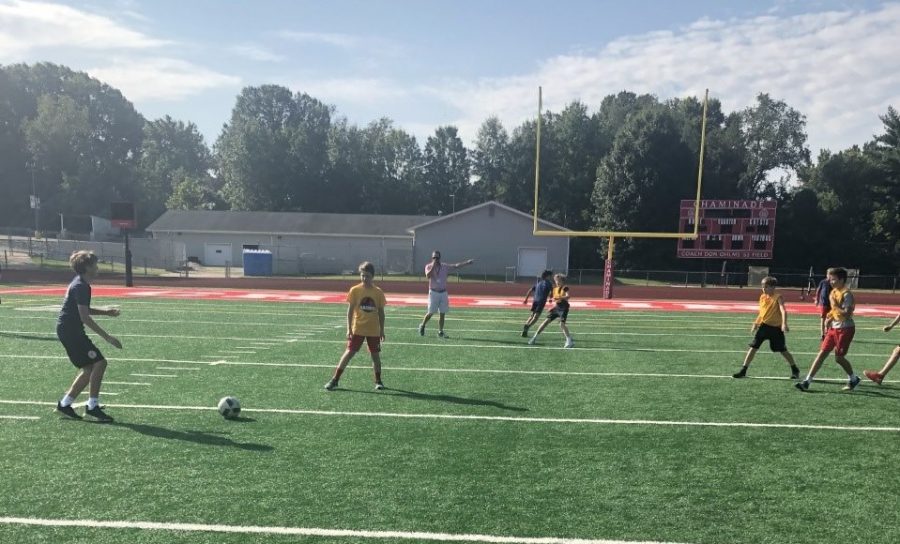 On Thursday September 12, during the Esto Vir period, the Middle Soccer Tournament took place on the Football field. The resulting matches ended with the Meyer House in first place and Mauclerc coming in second after a final goal count.

At 9:15 on September 12, five soccer matches occurred between the middle schoolers of the various houses of Chaminade, with 6th, 7th, and 8th graders all signing up a week prior to the event. The tournament was meant as a way to gather points for the House Cup that occurs every year. This was the first House Cup event to occur outside of attendance events and the middle school orientation day.

Matches lasted about 10-15 minutes, with the different grades of middle schoolers swapping out every 3 minutes. Every grade participated in each match at least once, with one or two grades being brought in twice.

The matches were split onto the two halves of the football field, with two concurrent games happening on either side with four of the houses while the fifth house rested at the drink station. The houses were set in a rotating cycle so that each house had the opportunity to play every other house while also getting a period of rest.

Various middle school students and teachers sat in attendance on the bleachers to view the tournament and to cheer on their fellow house members. Teachers also participated in the matches as refs and score keepers. Each house had student coaches consisting of the house captains and various other senior leaders from the middle school mentor groups that cheered on and gave advice to their middle school peers. There were many instances where the senior leaders would initiate a chant or huddle the players up before a match in order to boost their morale on the field and give them more energy.

At the end of the five matches, the Meyer and Mauclerc houses had matching win/loss ratios and were initially tied. Ultimately, the winner was decided by a counting of the total number of goals that the two houses accumulated over the five matches. This resulted in Meyer taking first place, with Mauclerc achieving second.

Following the Mauclerc house’s second place standing was Gray house in third, Lamourous house in fourth, and O’Donnell house in fifth. The placings were then converted into points for each house that contributed to the House Cup competition.

Commenting on the final standings of the tournament, Lamourous house dean Jessica Young had this to say: “It’s not about the winning, it’s about bringing the students and their senior leaders together in a friendly competition that helps them connect.” She went on, “It’s really important for the middle schoolers to see their senior leaders out here supporting and cheering them on. It creates a bond that is incredibly important for the rest of the year.”

For more information about the House Cup, go to chaminade-stl.org and search for it in the directory. The next house event will be an attendance event for the homecoming game against Vianney on September 20th.