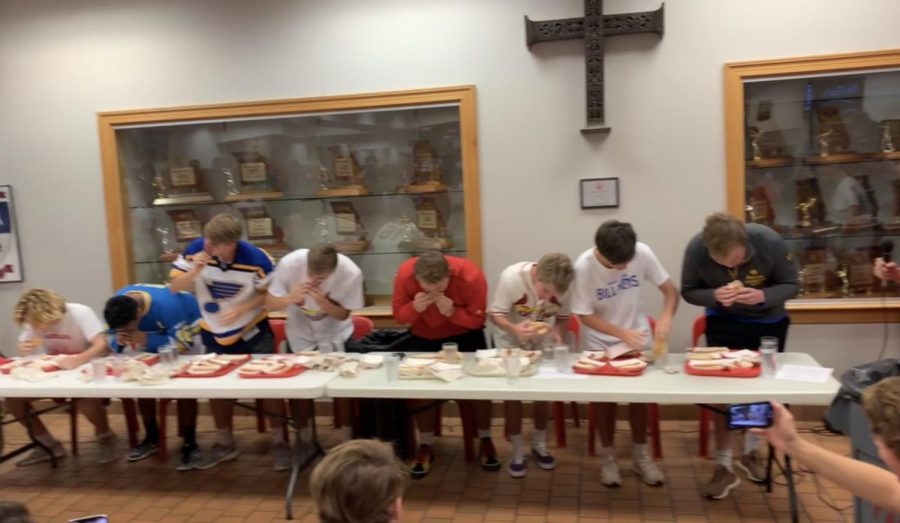 Mark Scott, a junior at Chaminade, is quickly earning a reputation as a hero around the St. Louis area.  Recently, he was the “guy who stood up to the villains at CBC.”  For the next couple months, there were standing ovations, hallway high fives and daily chants of  “Mark Scott!  Mark Scott!” around campus.  It was only appropriate that this household name became the first annual Homecoming Week Hot Dog Contest Champion.

The table was set. The challenge: Finish five hot dogs before any of the other contestants.

Now, this was not an easy task to begin with, but it is especially impressive given the murderer’s row that Mark was going up against. There were some big bodies involved, including Max Powers and Karthik Kanumury. In addition to these burly men, there were some “seasoned” eaters at the table by the names of Tanner and Brecken Wojohowski.  Going into the event, it was safe to say that Mark Scott was an underdog.

The atmosphere was electric. The tensions were high. People were eager to see this contest take place. Even Father Ralph was excited to see the finish of this hot dog showdown, for his camera and fist bumps were in full action.

Nick Politte was the chosen announcer, which was the perfect fit. He announced each contestant and told us about each one, and it only got the massive crowd even more excited. Video cameras came out, and the contestants eyed down their five hot dogs. From a crowd’s point of view, the hot dogs looked absolutely disgusting, as they were long, shiny and almost certainly cold. Regardless, these contestants wanted their free homecoming tickets, no matter the cost.

The contest started, and it was easy to see who was truly ready. Mark Scott was moving quickly, as he got the first dog down in about 40 seconds.

Max Powers was struggling from the beginning. It took him about 3 minutes to finish the first, and by the time Mark Scott won it all, Max only finished one and a half.

Fortunately, Mr. Shaver rolled two trash cans near the table, because they were needed. First, Charlie Reed let it loose in the trash can, calling it a day. Next, Karthik, the fan favorite, started running out of the cafe while vomit was flying out of his mouth. These two incidents got the crowd rowdy, as people were in disbelief with what they were watching.

By the end, it was clear that Mark was going to run away with the victory, since very few of the other contestants could even finish the hot dogs.  The crowd went wild, chanting the hero’s name while he lifted his arms in victory.

I caught up with the champion, Mark Scott, and ask him a couple questions. I asked how he prepared for this, and he told me, “I watched a lot of Joey Chestnut highlights. If anyone knows how to eat a hot dog quickly it’s that guy.”

I finally asked him the golden question about what his thoughts were after the last hot dog went down, and his response was magical. Mark said, “When Politte raised my hand and Father Ralph gave me a celebratory ‘Hey Buddy,” I felt as though I had just completed my greatest life accomplishment.”

This hot dog contest was something most students at Chaminade will never forget. Mark Scott, the champion, said he will be back for more next year.