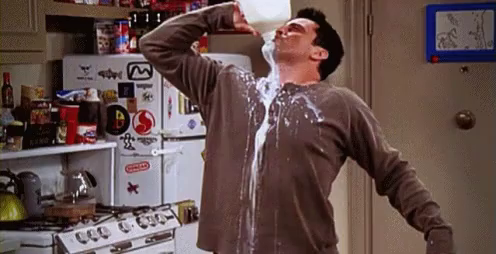 DON OHLMS FIELD—There are a number of ways that fans can help their favorite teams get hyped for a big game.  In Seattle, the famed “12th Man” chooses a flag raiser to get the crowd ready at the beginning of each Seahawks game.  The Pittsburg Steelers fans have become famous for waving the Terrible Towels, while Buffalo Bills fans have become infamous for body-slamming people through burning tables during pre-game tailgate sessions.

Here at Chaminade, we are beginning our own tradition, as Joe Dolan and Frazier Ott stepped up at halftime during the most recent football game in a head-to-head challenge to see who can chug a quart of milk the fastest at the Chaminade football game.

The Milk Chug tradition began earlier this year, and is now becoming a staple of CCP football halftime shows.  This event is the high-point of the halftime show and all eyes are on the contestants, there is a lot riding on this moment. Someone will be crowned the Milk King and take home the winning t shirt.

As Halftime approached, Frazier Ott was getting more and more nervous.  “I Don’t know if I’m going to be able to keep the Milk down after the Chug.”  This was not looking good for Frazier because Joe Dolan was coming off a big win and looked very confident.

When it was finally halftime everyone in the stands got together to hear the opening ceremony given by Jason Shekelton. He announced the contestants and it was an even cheer for both contestants. When he was finished announcing he gave each contestant their milks and it was time for them to begin the chug. They cracked the seal on their bottles and the countdown began.

Everyone thought that Joe Dolan had the win until he stopped for a breath of air in the middle of the chug, and that’s when Frazier took over.

Frazier ended up finishing in first but there was some controversy.  When Jason tipped the container upside down there was still milk left in there and he could have lost the chug off according to the rules, but since Joe still had more milk than Frazier did Frazier was crowned the Milk King.

This event is one of the crucial ways the senior class is bringing people to the games to support the various sports around the campus. This event is a great way to come together as a Chaminade family and have some friendly competition.

If you are ever at one of the many Chaminade sporting events make sure you watch the halftime show, you might even see me in one of the upcoming chugs.