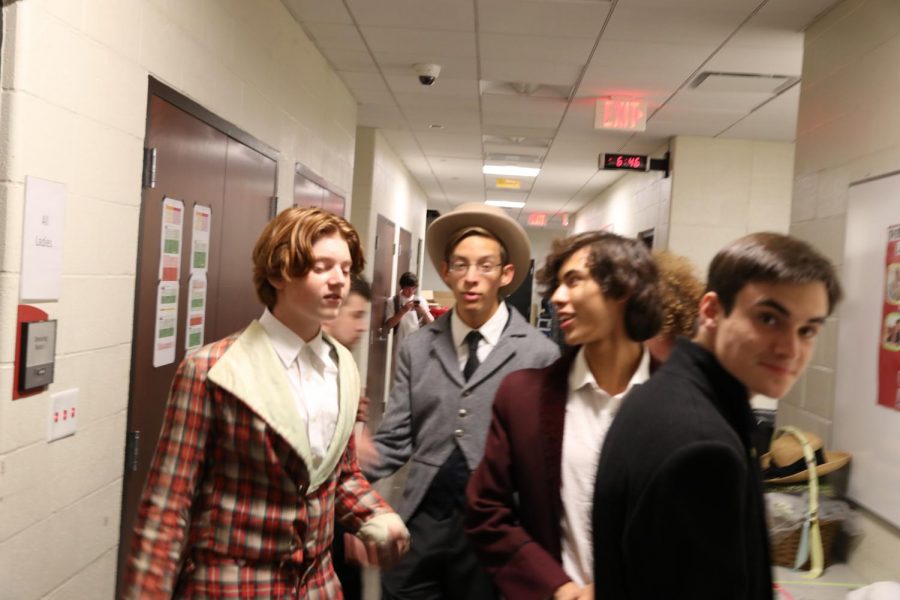 The curtains open. The lights go up. The audience waits in anticipation for that first line of dialogue to be uttered. It took a long time to get to this moment—some would say too long—but it’s finally here: the opening night of the show. Now it’s time to take a step back and look at the journey that led to this moment. Specifically, there is one week that needs to be examined: tech week.

Tech week, also known (un)affectionately as “hell week,” is the final week of rehearsal leading up to the opening night of a play or musical. During this time, the final preparations for the performance are made, both acting and crew based. Light plots are added, costumes are worn, and every one of the actors and crew members nearly rips out their hair in distress.  Currently, two productions of interest are in the midst of tech week: On the Razzle at Chaminade College Prep and Peter and the Starcatcher at the St. Charles Community College. I myself am a part of the latter but I also know several people who are in the former. I interviewed several of them about their experience during tech week and how they managed to balance both the chaos of hell week and the challenges of school. This is what they had to say.

First and foremost: free time. It’s something that everyone wants and not many have. People during tech week, especially, have a considerable lack of free time. Here are a few of the responses given when asked how much free time the students had: “30 minutes to an hour,” “Maybe half an hour,” “An hour at most.” What tends to happen for most students is that they will leave school have about an hour or so of homework time and then must get ready for rehearsal by both changing clothes and eating dinner.

Speaking of homework. Already there’s a negative connotation to the topic and, as you will soon see, it’s justified for actors. Cecilia Van Sant, a member of “Peter,” goes to Ursuline Academy and talked about her struggles with homework during tech week.

“My school is online-based, so I am limited to where I have Wi-Fi in order to do homework. I can’t start my homework until around 11:00 after rehearsal has ended because that’s when I finally have reception.”

Tech week limits the amount of time that these actors have to complete their homework which reduces their free time which increases their stress and so on. It’s a vicious cycle. Rob Garner, a member of On the Razzle, commented that “Some teachers will give extensions but it’s not a guarantee.” Sam Bottini (“Peter”) had a similar response, “Many teachers don’t realize the busy schedule that we have, so I get a ton of essays and projects that I don’t have time to do.”

Even without balancing homework, school is enough to stress out students during hell week. Kelly Cavanaugh (“Peter”) spoke to me about it, “The worst part is waking up every single morning and knowing that I am going to have to sit in my stupid classes and just be depressed for seven hours of the day and then I come here sleep deprived and I am just dead sometimes.” Tech week takes a lot out of a person, but school can do even more. “The homework load especially makes it hard,” Cecilia commented, “And then I do not get a lot of sleep so the next day I’m exhausted and can’t focus in class.”

Many of the actors interviewed made jokes about how they expected their grades to drop during this period. The balance of school and rehearsal can make it difficult to succeed educationally, especially when so much time is dedicated to the latter.

Now onto the actual rehearsal process. Schoolwork aside, tech week itself gives plenty to be stressed about. “It’s hard making sure I know all my lines and blocking and navigating my way backstage.” Claire Ruttencutter (On the Razzle) said, “It’s really hectic especially with larger casts and it’s hard to maneuver around when there are set pieces, props, and people everywhere.” Kelly had a similar grievance, “Tech week takes a physical toll on your body. You’re constantly having to portray a whole range of emotions and doing that every night can be exhausting.” There’s a reason they call it hell week. By the weekend, you’re going to feel like hell.

In the end, tech week is a necessary evil. Sure, it’s stressful, but without it, a play would never be able to come together. That is something that all actors can agree upon. Tech week is a term synonymous with stress and chaos, but without it, the show would really go to hell. And no one wants that.