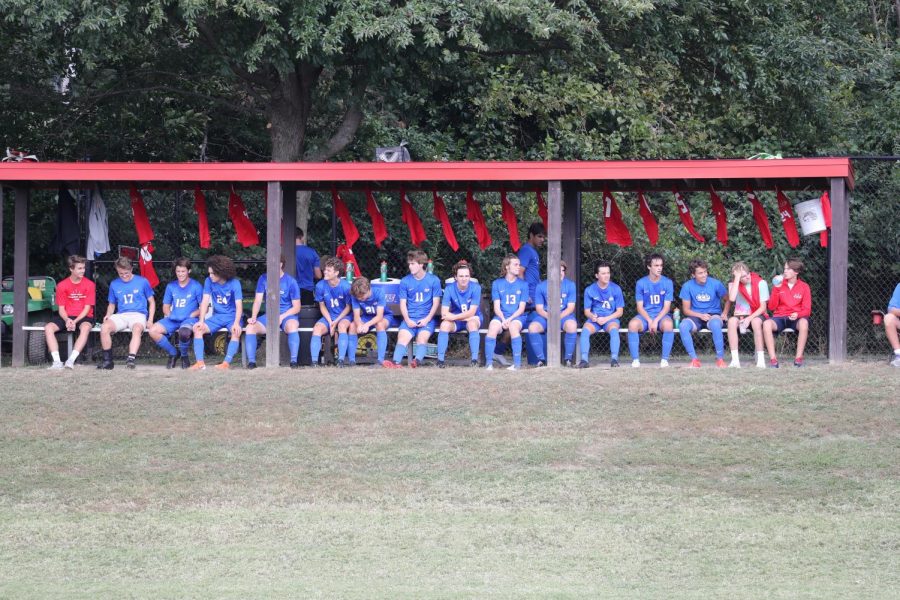 On September 24, 2019, the Chaminade Varsity Soccer Game went up against Vianney High School and ended the game with a final score of 4-0.

At the start of the game, Chaminade came out in their crisp new blue uniforms in honor of the St. Louis Blues themed game, and like the Blues during their playoff run, CCP was prepared for battle.

The action started pretty back and forth. No one took control to start. Then, about halfway through the first half, Chaminade was down in by Vianney’s goal and took the chance to take a shot at goal. The ball sort of bounced around a little bit and then it got hit by junior Joe Hipskint into the goal and Chaminade took a 1-0 lead.

After that first goal, Chaminade pretty much took control of the field and they just dominated the game defensively. Not long before the second half of the game came to a close, another junior, Joe Cole, had the ball and he beat three Vianney defenders and cut back on a fourth and finished with a beautiful kick to give Chaminade a 2-0 lead going into the second half.

Vianney tried to make some strategic changes for the second half to come back from the failures of the first half. They changed out their goalie and just tried to see what they could do to provide a spark that just never came. Early on in the second half, Chaminade was awarded a penalty kick and that ended up providing yet another goal, bringing the score to 3-0. Minutes later they scored again, and it got to the point where both Vianney and Chaminade shared the feeling of “we don’t care anymore.”

It was about 20 minutes of nothingness with a little back and forth towards the end but Vianney couldn’t sustain anything. The game ended with a score of 4-0 as Chaminade had a decisive victory over Vianney. Because of how strong of a lead Chaminade had, many of its players, especially the seniors, were able to relax and have a low-stress situation and just have fun.

The Red Army, led by several of the Chaminade seniors, were decked out in Blues-themed garb. CSPN correspondent Eric Meyer was watching the fun from the press box. “They were quite rowdy. On the first two goals of the second half, the attacking side for Chaminade was by the student section. So, they ran into the student section and the student section tried to run onto the field both times and it was just chaotic.” By the end of the game, the Red Army had calmed down but initially, they had a significant amount of energy that undoubtedly boosted the morale of the soccer players.

The weather, unlike the rest of the factors the game involved, was quite inconsistent. It started sunny, then it got cloudy then it started to rain, then the sun came out, but the rain was still going, then the rain stopped and it started to warm up and get hot. And this was only the first ten minutes of the game. Brody Ellison, another CSPN correspondent, noted that “If only it would start snowing. Then, we would have experienced everything.”