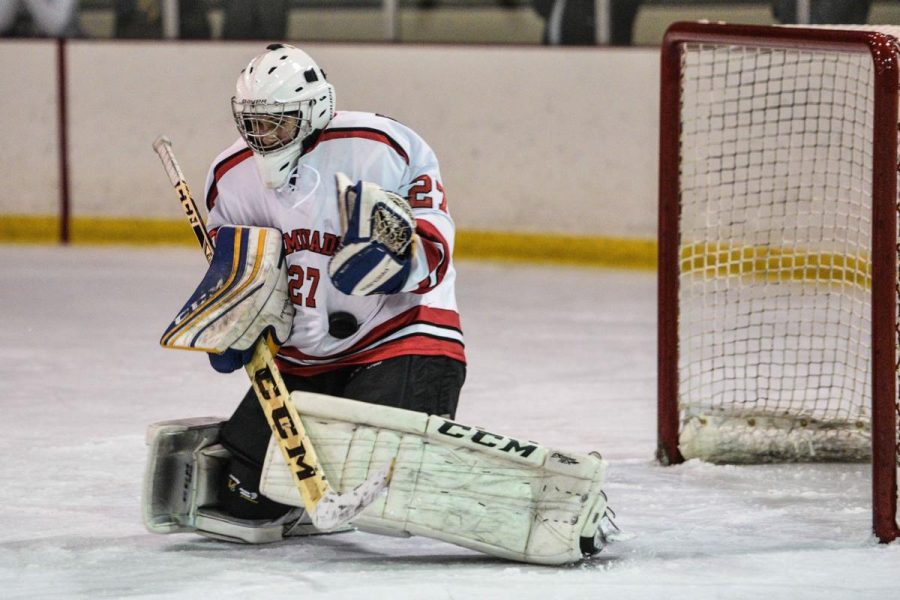 As the winter sports season rolls upon us, we shall look at one of our most successful sports teams from last year: our hockey team. After a huge victory over CBC which led to assault and a final four appearance, it is clear that the 2018-19 Chaminade hockey squad was prosperous. With a couple of key seniors leaving, some may wonder how the 2019-20 team will fair. To find answers, I asked senior defenseman Blake Smith some questions in order to get a preview of the Chaminade hockey team for this season.

When asked about how experienced the team is this year, Blake responded, “The seniors have shown great leadership so far in preseason, but the younger guys have great talent and if they buy into the leadership, we will win a lot this year.”

Captain Michael Shanahan and assistant captains Kyle Crews, Tim Delaney, Ryan Yemm, and Andrew Clarke are sure to be great leaders on the ice along with the guidance of the seven other seniors.

Speaking on the two of them, he said, “Kyle Crews has always been a key player for Chaminade the past few years, but he has been even more technically sound this year in preseason than in past years. Kyle has also proven to be a key part of the Chaminade penalty kill and power play units this year. Kyle’s playmaking skills can create a lot of opportunities for our first line this year. Landon Boothe came back from summer break a whole new player. Landon has put on a lot of muscle and has become an offensive force for Chaminade hockey. With his improved shooting skills, I would look to Landon to score a lot of goals for us this year.”

Regarding the team’s strong suits, Blake claims that depth is their biggest attribute. The team will be able to roll out several lines without missing a beat.

He also says that our goaltending is one of our greatest attributes claiming that, “Nick Jacoby is the best goaltender in MidStates this year and will dominate games for the team.”

The schedule this year is expected to be more challenging than last year due to the stand-out performance from last year. They have very few out of conference games and therefore will be playing MCC teams often.

When speaking on the those MCC schools, Blake stated, “Every MCC school is going to have to fill gaps in their depth chart to replace the class of 2019, but we are not overlooking anyone.”

In the Top Hat Tournament, Chaminade won 2 of their 3 games, giving them a hot start to a long season. The team looks very talented on paper and will hopefully produce on the ice.

Blake said that they are, “looking to appear at the Enterprise Center this year in March.” They have been working harder and harder each day in practice in order to accomplish their ultimate goal at the end of the season.