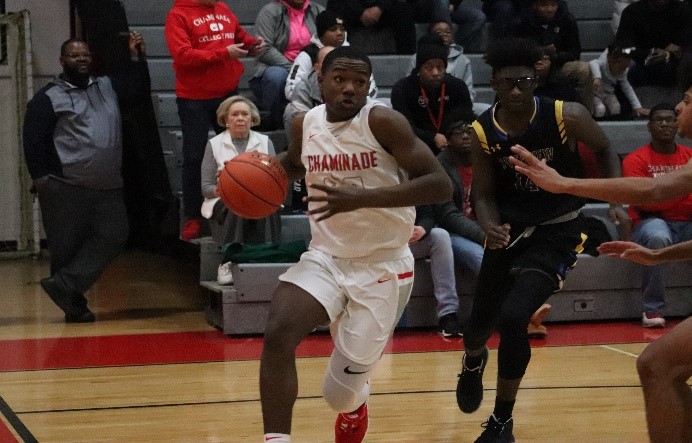 The Chaminade basketball team opened up their season at home against Riverview Gardens, bringing home the victory by a score of 66-35 led by sophomore Damien Mayo’s 21 points.  Senior Harrison Vickers added 20 points to secure the win.  It was the the first time since a 2015 victory against McCluer North that the Red Devils have opened the season at home.

The team got off to a fast start by applying defensive pressure and forcing turnovers in the first quarter, finishing the first eight minutes up 25-6.  Mayo and Vickers found success grabbing offensive rebounds and getting second-chance points as well as getting to the free throw line.  Both players finished the first half with 14 points, and the Red Devils led the Rams 51 to 19 going into the locker room.

After the intermission, the Red Devils kept up the pressure, scoring 25 points while only giving up 6 in a dominant third quarter.  They went into the fourth quarter up 76 to 25. From there, the team took their foot off the gas a bit, only scoring 10 in the final eight minutes while letting up 10.

The team finished the season opener against Riverview Gardens in impressive fashion, as it is the team’s only game before their trip to California next week. While in Los Angeles, the team will participate in the second annual Marianist classic which hosts top Marianists high school teams from across the country over a three day event. They will play St. Vincent – St. Mary’s on Friday December 20th and then Central Catholic on Saturday December 21st to try to improve to 3-0.