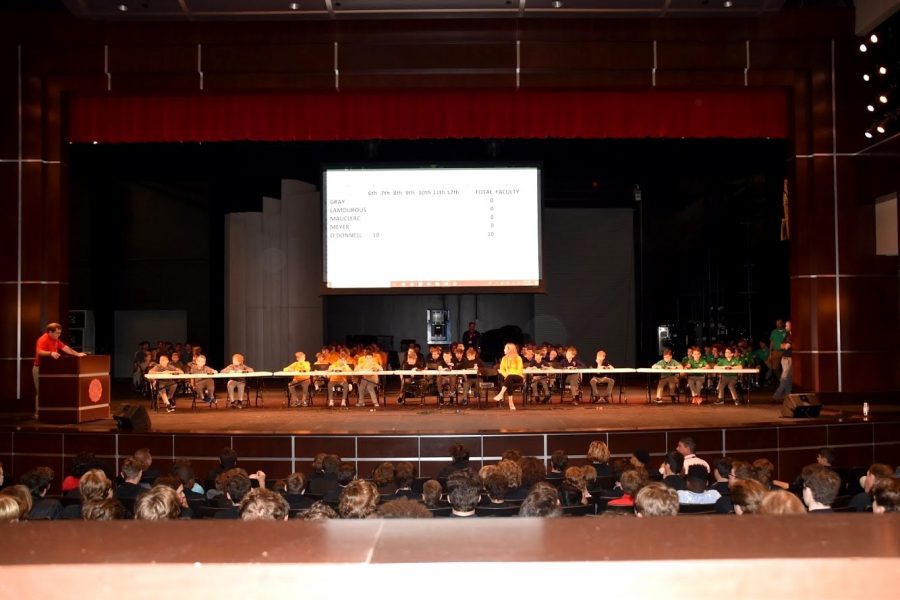 CHAMINADE–The Gray House opened up the annual Quiz Bowl with a commanding 50-point win on November 21.  The Quiz League then continued for several weeks with daily lunch-time competitions and ended with Gray House expanding the lead and cementing their first-place ranking.

Quiz League began, as it always does, with an all-school assembly that included a competition among all the houses. Each house had 3 members per grade on each team. There was also a bonus round for no points that included teachers.

For several weeks following the initial assembly, there were lunch competitions done where each day two houses would compete against each other for points. These points would then be added up at the end of the store and then placed into the rankings of each house for total points.

At the assembly, the initial points won by the middle school teams displayed a very different possible outcome than what actually ended up happening. For the first few rounds, O’Donnell House won point after point and had a significant lead. This would keep them in good standing for the rest of the rounds, despite not keeping up the same pace when the competition reached high school.

In the high school rounds, Gray House was the clear winner. The other houses would win a few points in each round while Gray would almost always have a 40 to a 50-point lead. The assembly ended with Gray House winning a clear first place, Mauclerc House in second, O’Donnell House in third, Meyer House in fourth, and Lamourous House rounding it out in fifth.

The final round consisted of teachers only and was not for points. It was mostly for the amusement of the students and nothing else.  Dr. Garrison almost repeated his disastrous performance from last year when he incorrectly answered yet another history question, but he redeemed himself with a solid performance after that.

For a while now, many students have inquired about the reasoning for why the Quiz League exists.  When asked about Quiz League, Mr. Shaver had this to say:

“The purpose of the Quiz League is to encourage, recognize, and celebrate the academic knowledge of Chaminade students. Students who are strong academically—say in history, science, literature, or math—do not get too many opportunities to utilize their gifts to contribute to their house’s effort toward the House Cup. The Quiz League is an effort to provide an opportunity for participation in the House Cup for a wide variety of students. The House System is ultimately about fostering a sense of belonging for students at Chaminade, and I believe that activities like the Quiz League, by offering an opportunity to contribute to something bigger than yourself, can offer a chance for some students to know that they belong.”

On a much less important level, the Quiz League also offers a chance to expose students to the Scholar Bowl program, teams of students who compete for Chaminade against students from other schools.

For more information on Quiz League and Scholar Bowl, go to the Clubs & Activities page on Chaminade-stl.org.