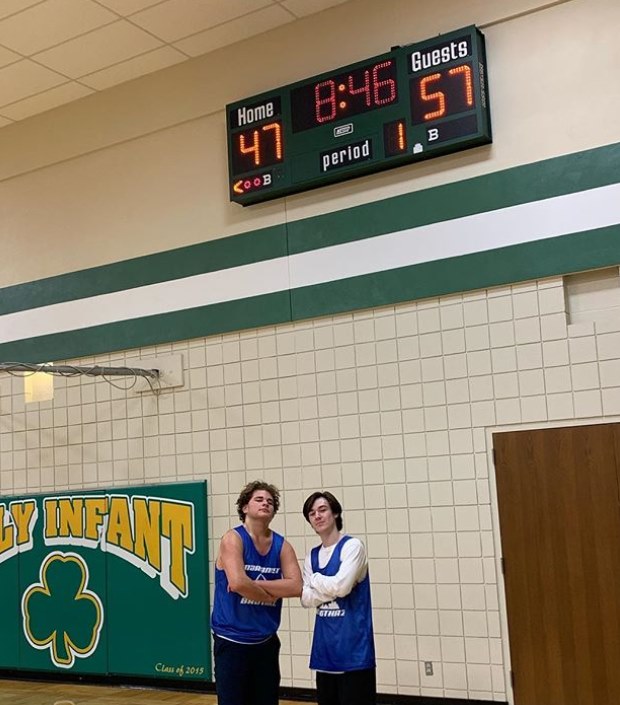 In the fall of 2018, a group of friends—Ted Sudekum, Carson Glynn, Jack Guyot, Dan King, Mark Scott, Jack Weber, Cooper Benedict, Adam Cunningham and myself—decided to build a team. We named ourselves the Marianist Brothaz, and after that, we went even further, making jerseys with nicknames on the back as a joke.  At the time, we just thought it was going to be funny. Our whole goal was to go out there and mess around and have fun playing basketball.  We didn’t think it would turn into anything else.

With a goofy name and some dope jerseys, we then created an Instagram account dedicated to the team and just ended up posting memes about our team and (now infamous) player profiles. This started out with naming the player and absolutely roasting this person with humiliating pictures and videos of these people with a description of these people. This became a hit and the account started growing rapidly. By the time we got into our season, it had 112 followers with 80 posts.

Once the season started, we started using the account to post our game recap with a picture of us in front of the scoreboard and it became a hit because we just never lost.  Pictures like these sparked the fans and got them excited for the continuing of the season.

As the season progressed, we learned that there were other familiar faces in the league.  We ended up playing two other Chaminade CYC teams. These teams included the Fighting Irish and the Scorers. The Fighting Irish include players like Jimmy Grumich, Sam Chibs, and Max Wolkey. We played them first in our second game of the season and let’s just say it wasn’t hard. We steam rolled the Fighting Irish without a challenge.

Next came the Scorers, and they were a more skilled group with multiple athletes like Kevin Laderiere, Sean Green, and Jackson Doty to name a few. This team was a struggle and we ended up tying them and we were bound to see them in the playoffs. We won our first playoff game and so did they. So, if we both won our next games, we were going to see them in the championship and they unfortunately lost and we faced a team that had a kid that played on CBC’s varsity team as a freshman. He doesn’t play varsity anymore, but still dominates the CYC league. He had 44 points and was 6 foot 3 inches 220lbs and could shoot the 3. He was quite hard to stop, but the game ended in a dramatic overtime.  And although we didn’t win the game, we eventually won the championship.

We enter the Junior Senior league now and have harder competition, although we are the defending Champs and we believe nothing will stop us.