The Houston Astros are Your 2017 World Series Champs! 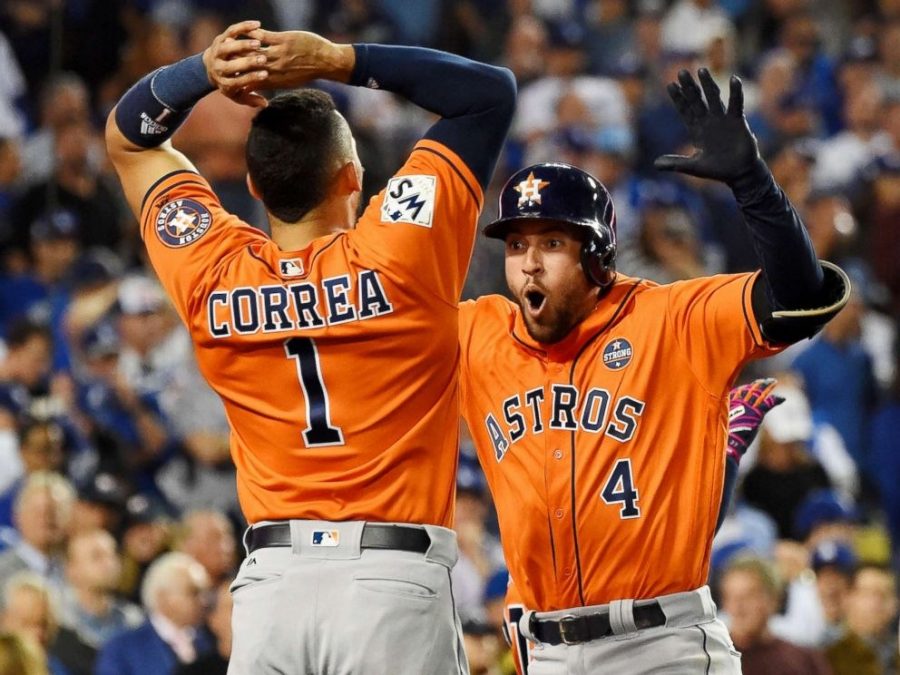 HOUSTON TX – Several weeks ago, the 2017 Houston Astros were accused of illegally stealing signs from opposing teams, giving them an unfair advantage.  This was made worse by the fact that they won the World Series that year. Former Astros players have spoken to this, and Major League Baseball has begun an investigation of the organization, with probable punishments and suspensions to be handed out at its conclusion. Video and audial evidence has surfaced which seems to suggest that during their 2017 World Championship season, the Houston Astros placed a camera in center field of their home Minute Maid Park, which would relay the video of catcher’s signs to a monitor in the clubhouse. Someone at the monitor would then see the signs and make an audible “banging” sound on a trashcan, signaling to the hitter in the batter’s box of what pitch was to come: fastball, or off-speed.

Several former Astro’s players and other personnel have come out about this scandal although only current Athletics pitcher, Mike Fiers, has come out and revealed himself. Evidence of emails tracing from an assistant to general manager Jeff Luhnow also shows that perhaps there was a higher hand in this scandal. According to USA Today, an email coming from Assistant GM, Kevin Goldstein, was sent to Astros scouts about, “picking up signs coming out of the dugout. What we are looking for is how much we can see, how we would log things, if we need cameras/binoculars, etc. So go to a game, see what you can [or can’t] do and report back your findings.”

Sure, it’s interesting, but why does it matter? Hasn’t sign stealing been a part of baseball for generations? Well, yes. But no. Major League Baseball makes it very clear in their rules, with an updated rule coming out this year, that sign stealing is allowed by runners on the basepaths, and coaches in the dugouts, but that the use of any device to steal these signs is prohibited. For a bad team to have committed these crimes against the baseball community, most people wouldn’t take much offense, and it is likely that former members of this team would have very little reason to speak out about it. Who would care if the Detroit Tigers stole signs in 2019, because they lost 114 games. However, this is no run of the mill team. These are the Houston Astros who have won 311 games over the past three years, including 2 AL pennants, and a World Series Championship.

To be fair to the Astros, they have had some sluggers on their team who are considered the elites among the baseball community: Jose Altuve, George Springer, Alex Bregman to name a few. However, many believe that their unfair advantage has tainted their recent success because of the “What If” game. For example, George Springer hit .302 with 6 homeruns in the 2017 postseason. He is an elite hitter, but would he have hit a monster homerun on an 0-2 count if he didn’t know the slider was coming? It is interesting to think about. This is not the first time that the Astros have been involved in a scandal. However, the first time they were the victims. The St. Louis Cardinals were busted in 2016 in a scandal involving hacking of the Astros’ databases involving scouting information. This occurred when current Astros GM Jeff Luhnow left the Cardinals organization and the Cardinals were concerned he pilfered some of their info in the move. The Cardinals lost 2 million dollars, their 2 highest draft picks, and a man was sentenced to 46 months in prison.

Now Luhnow is on the hot seat and the rest of the MLB is not happy about it. Some current and former Dodger’s players have voice their opinions on their 2017 World Series counterparts and their suspect scouting methods. Former Dodger’s outfielder and member of their 2017 World Series roster Yasiel Puig said, “The whole team knew mann (bleep) cheaters but what they gonna do man.” Other respected baseball minds such as Kenley Jensen and Sean Doolittle calling for harsh punishments on the Astro’s organization. Commissioner Rob Manfred has recently made comments regarding the scandal, and it does not look good for the Astro’s. It will be interesting to see what MLB does in the coming months, with the Winter Meetings upon us, and the MLB draft this June.