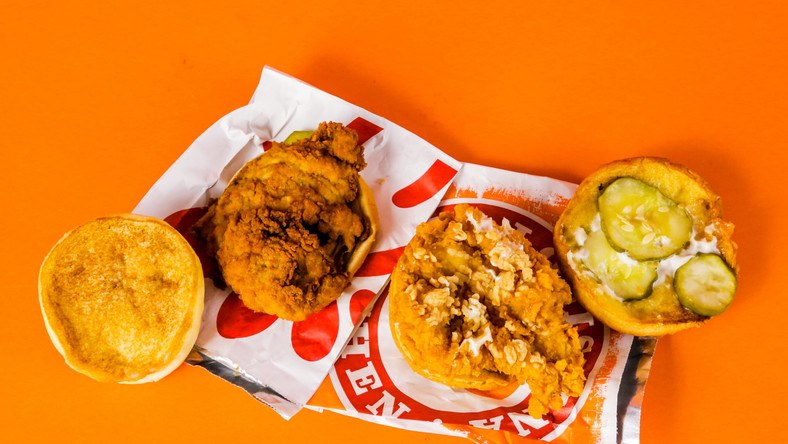 Just two weeks after launching, they were sold out. People are losing their lives over them. What could possibly be this demanding? No it’s not a Superbowl ticket, lottery ticket, or the last Willy Wonka golden ticket.  It’s a chicken sandwich.

The Popeye’s chicken sandwich is, in fact, just that demanding. A 28-year-old man was stabbed to death over one in Baltimore. Social media is going absolutely bonkers over the sandwich debate. Popeyes had to stop selling the sandwich for over a month because they were selling too fast. Customers were waiting hours just for a limit of two sandwiches. This sandwich is kind of a big deal.

Popeye’s isn’t new to the chicken sandwich game, but until recently, they have been a clear second-place to Chick-Fil-A.  Chick-Fil-A has recently begun to dominate the fast food market, and no one questioned the superiority for many years.  That is, until the Popeye’s chicken sandwich arrived.

It’s not just any sandwich, but a spicy chicken sandwich that includes pickles and your choice of mayo or the spicy Cajun bread. Sure, it sounds like a regular chicken sandwich. So what separates it and caused it to become an internet sensation?

It started when Chick-Fil-A sent out a tweet shortly after the Popeye’s sandwich was released. The tweet wrote, “Bun + Chicken + Pickles= All the (heart emoji) for the original. Popeye’s then tweeted back, “…y’all good?”. The twitter fingers between the two companies had people rushing to Popeye’s so they could decide who has the better sandwich between the two fast food restaurants which helped Popeye’s have its biggest product launch in over thirty years.

I asked Jeff Garlich on his thoughts. “The Popeye’s sandwich is so much better than Chic-Fil-A. I think it’s because I’ve had Chic-Fil-A so many times. The bun is literally perfect, the crispiness of the burger is perfect, then the pickles are sliced thicker than normal so it is just some heat”.

I then talked to Matteus Case about his opinion. “Chic-Fil-A still has the best chicken sandwich in the game. I don’t want to hear anything else about it. The overall taste of the burger is the greatest along to go with the sauce. Chic-Fil-A is still the GOAT.”

The responses have been pretty even on who wins. Most people agree that the Popeye’s texture of the crispy chicken and buttered bun beats Chic-Fil-A, but Chic-Fil-A has a better tasting sandwich. I guess it just depends what you prefer in a sandwich.

Both sandwiches are being sold and you can buy them at any location. Join the debate and get to a location if you have not had the sandwiches.