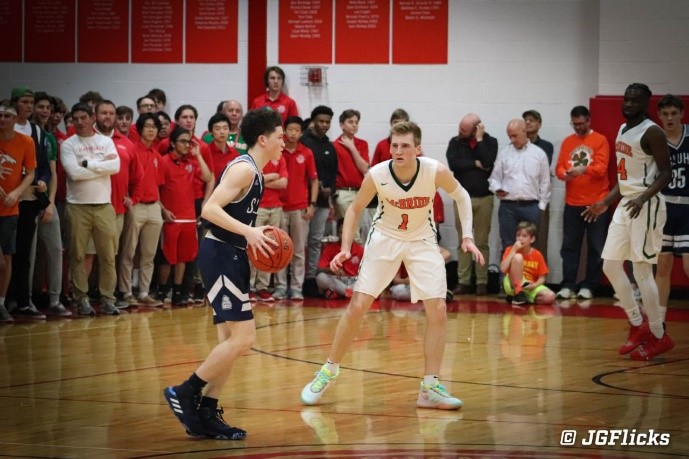 For a school that’s been closed since 1971, there was no shortage of McBride spirit wear in the crowd filling the Athletictron Friday night for the basketball team’s 77-63 victory against the SLUH Jr. Billikens. McBride alumni filled the section of the bleachers directly behind the Red Devil bench, so many of the Micks got to enjoy watching Coach Bennett direct his team in his expressive and engaged style.

The squad rocked the retro white McBride High School Nike Jerseys during the game to honor the Marianist school. The tradition started a number of years back and it has grown to be one of the highlights of the entire basketball season. It is an event that unites old classmates and celebrates Marianist education while keeping alive the tradition of the MCC.

As far as the game, it was the Terris Reed Jr. show. The starting center had twenty-seven points and shot a perfect 12-12 from the field including a three pointer, and he went 2-2 at the free throw line. His low post dominance allowed him to dunk the basketball with force, rattling the rim, or use ballerina footwork to finish softly and float the ball in. Either way, SLUH had no answer for Reed.

Luke Kasubke had a solid night finishing with fifteen points, coming mainly from under the basket finishes and points from the charity stripe. His three-point shot wasn’t falling as steadily as previous games; nonetheless, he was able to contribute by driving to the rim and putting the ball in the basket.

Harrison Vickers continued to attach the rim, but his style was slightly different. He ran to the basket with deliberate and strong steps that put himself in the best position to score. Vickers played like a fullback with great footwork able to cut between defenders. If he couldn’t finish at the rim, he would almost certainly get fouled and go to the free throw line for two shots. He also scored a put back basket off a missed free throw from one of his teammates. Vickers combined brute strength and razor precision to give his best effort in scoring the ball.

His teammate Matteus Case also drove to the rim with his own unique style. He would glide to the basket and move the ball over his head, to the side, or pull it up from underneath to score in the paint. The senior guard’s style is smooth but not cocky. Case also contributed by sticking to his three-point shooting even after early misses.

The game wasn’t very fast paced nor high scoring, nor even the most back and forth, but it still provided enough drama and big time plays to keep the packed gym entertained for four quarters. Friday’s game was packed: the pep band, the huge student section, the Micks, SLUH’s fans, Chaminade families, media outlets and basketball fans in general squeezed into the seats, stood on the baseline, leaned on the upper glass that looks down onto the court and crowded the entrance, all to get a glance at the 2020 Red Devil team.

This is  just the start of these raucous environments in which the team will continue to play. The Devils heads to Highland Illinois on Saturday January 11th to compete against the number 16 nationally ranked team, Hamilton (Wisconsin) led by the number two player in the class of 2021, Patrick Baldwin. Coach Bennett says, “It’s a great opportunity [for the team]” and could possibly catapult the Red Devils into the USA Today top 25 national rankings.

It was a great turnout Friday night and the team hopes to keep the ball rolling for the remainder of the season.