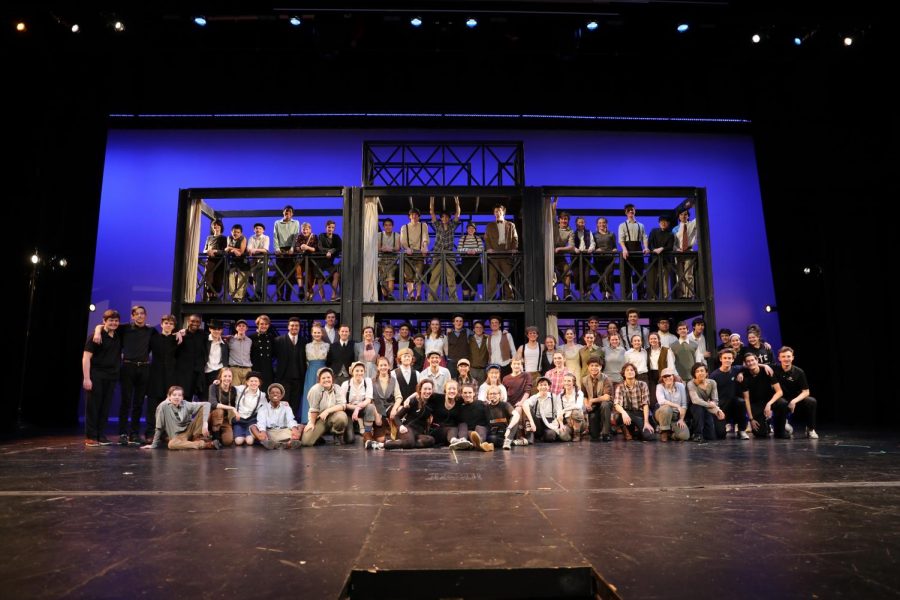 The entire Fox theatre erupts in applause as Rob Grumich walks past rows and rows of attendees to reach the stage. He comes up the stairs and accepts the award as the cast of Newsies nearly drowns out the rest of the audience with their celebrating. It was the second-to-last award of the night and now the Chaminade students knew they would not go home empty-handed.

It has been nearly six months since that eventful day and now people are gearing up for the next big musical production from Chaminade drama, a show that is arguably the quintessential musical: Les Misérables. In all the anticipation and excitement, it is important to acknowledge that it wouldn’t have been possible without the immense increase in prestige and quality in the drama department that came from Newsies. In particular, it is important to acknowledge Rob Grumich’s contributions to the program and the sheer amount of work that goes into directing a musical production.

What follows is an interview that I conducted with award-winning director Mr. Rob Grumich.

What was the experience of winning Best Director at the SLHSMTAs like?

It was really great. I certainly didn’t expect it.  And while I do consider it an honor to win and certainly an honor for our whole cast, I wish the show itself would have gotten some more recognition with some other awards. But having a number of nominations last year for Newsies was exciting. I was incredibly pleased with the work our entire Newsies cast and artistic team did on that show. So, I think that one award was at least in some way a validation for everyone involved.

How long have you been directing plays, high school or otherwise?

I’ve been directing for just over 25 years now. My first experience was a one-act my senior year of high school and then I had the opportunity to direct two mainstage productions as an undergrad and later earned my Masters of Fine Arts in Directing.

What makes a show a good choice (for producing, in general)?

I think when selecting a show, you need to consider your audience – what issues, themes, style, the genre would they enjoy. That goes whether you are picking a show for a professional theatre or educational/school setting. But when selecting a season of shows for Chaminade or any school setting we consider the types of shows we have done recently to create a mix and broad experiences for our students and the audience. Mixing in classical and more obscure plays and styles of performance along with more contemporary pieces. It is an educational endeavor. Also in a school setting where you are likely pretty familiar with your pool of potential performers we look at do we have a lot of people involved right then, are there a lot of singers in the bund or not, do we have a lot of girls involved and need to think about those roles as well. So, while we don’t pre-cast the show, knowing some general things about the pool of actors you have dictates the size, types of show, etc. that you may pick.

After you’ve chosen a show, what are your first steps for adapting it at Chaminade?

At least in recent years since our numbers of people have been growing, we have looked at shows that had some flexibility in cast size – where we can add cast members or flesh out some aspect of the show. We did this with the ensemble of doctors last year in The Imaginary Invalid. We played off the way the show would have originally been performed 200 years ago and adapted that concept, modernized it and then that allowed us to create more opportunities for students.  We also need to consider which theatre space it will be performed in. We are blessed to have the mainstage space here as well as the black box. So which space will suit the show better or can the show be done in one or the other spaces if that’s where the calendar dictates it takes place? Those are questions we have to consider in planning and selecting the season.

How difficult is it to place students that you know so well into different roles every show?

Casting is always difficult and, in my opinion, the hardest, but most important part of the process. If you get the right people in the right role your job as a director just got a whole lot easier and more fun. Again, being an educational institution, we try to balance the roles out a bit throughout an entire year or over a few years, so some people aren’t always the main roles. But at the same time, we and the administration want us to put on the best show we can. So, to use an analogy, the varsity basketball team is going to play their best players at the most important time. So, while there is no “bench” in theatre, we want to provide opportunities for everyone to participate and shine in some way while also trying to put on the best production as a whole.

How much do factors like height or other physical characteristics affect the casting process?

They factor some. I’d say less the specifics of height and weight or something like that, but overall what “type” a person is. Maybe their type has something to do with their physical characteristics, but I think it’s more about their personality, how they come across on stage. Do they seem more mature? Are they silly and uninhibited? Are they a good mover or more of a solid/strong physical presence?

How closely do you adhere to your original vision of the show throughout the rehearsal process?

I think pretty much. That’s my job as a director- to provide vision and keep the cast and designers moving in that direction. Certainly, though, particular elements and moments of the show evolve in collaboration with actors and designers in rehearsal. I am always one to say that the collective brains of the people I’m working on a scene with or trying to solve some technical issues are always better and more creative than my one brain. So, I certainly want to be collaborative.

What do you feel is one of the biggest hurdles or challenges in producing a play for high school?

Dealing with conflicts and just busy students is sometimes tough. Our students are generally involved in a lot of things – be it sports, other clubs, academic pursuits, etc. So, coordinating schedules on a big show is certainly a challenge.  More on the artistic side it sometimes is a challenge bringing along a younger or inexperienced actor. I wouldn’t say that’s a bad thing because that’s the whole point of what we are doing in educational theatre. But sometimes we have people of varying skills in our shows and so it becomes in places the task of teaching acting while also directing a show. That’s just something that’s not as prevalent when directing in the professional world. But in many ways, it’s what I love about educational theatre – getting new people involved and them discovering their creative “voice”.

What is the most important aspect of a show in order for it to be a success?

As I mentioned casting is HUGE. I think though too that the cast is a community/family. That they are there to support one another and in it for one common cause. We’ve worked hard to create that in Chaminade Drama as a whole over the last few years and the current group of students has been instrumental in creating that culture. When that is present in a show it helps everyone rise to a level, no matter the perceived “talent” of certain people.

As a director, what is it like seeing the actors perform the show on opening night?

I just love the energy and the actors and the audience’s excitement. Sharing our story with people is what it’s all about, so I am most excited to see my performers have that opportunity and the kick they get in their energy when the audience is present. Also, it’s just an adrenaline rush and great satisfaction to see everyone’s hard work come together.

Do you ever experience “Post-Show Depression” or PSD after a show’s run has ended?

A bit, but mostly I think by the time the show is performing I’m ready for it to be over. I don’t mean that in a bad way – even the shows I’ve loved the most, I find myself ready for the next challenge and usually a bit of rest!  Directing a play or musical is a difficult but often rewarding challenge. A director gets the opportunity to watch a show grow from the first read-through done by the cast to the final bow on closing night. They get to be there every step of the way and help the actors to create characters that they themselves might not have been aware they had the potential for. The director makes or breaks the show and is always that guiding force to create this work of art called a play.

Les Miserables opens on February 13th and goes until the 14th. For information go to the “Upcoming Admission Events” page on chaminade-stl.org.