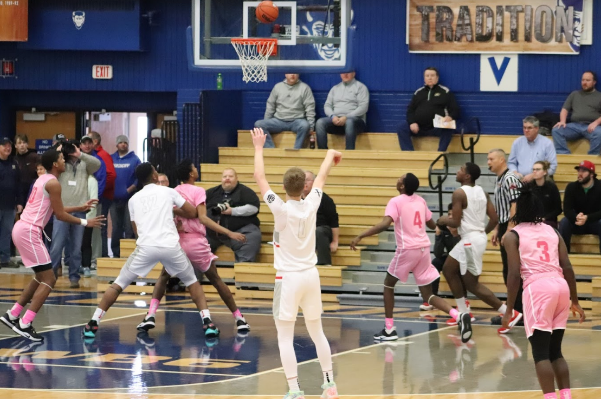 Chaminade didn’t get the exact results they wanted from the Quincy Shootout. Sure, they did beat Chicago Corliss 58-42 and played particularly well in the second half of the game, but that came after a frustrating 72-69 loss to Memphis East the night previous. Chaminade’s loss to Memphis was a game of moments, moments where it looked like the Mustangs couldn’t compete with the Red Devils at all, but moments when Chaminade looked lost on the court. Friday’s disappointment lead to the collective sense of urgency during the Saturday morning game.

As soon as the team entered the Quincy High weight room-turned-locker room, the players put on their uniforms and headed to the court. Being the first game on the slate meant they were free to warm up in the gym for as long as they needed to. The Red Devils took advantage of that opportunity. Typically, the team warms up for 30 minutes at most, but the Saturday morning warm-up was close to an hour long. A sense of urgency was evident.

Chicago Corliss played at a slow and methodical pace similar to that of Vianney. Corliss didn’t play a Chicago style game. Typically, strong Chicago teams play fast, strong, athletic and attack the rim, but this wasn’t the case for the Trojans. The team only scored three points in the first quarter due in large part to a slow half-court offense focused on moving the ball around. Corliss had no intentions of going to the basket.

On defense, the Trojans had some success, especially in the second quarter, playing a zone defense that limited Chaminade to seventeen first half points. The first two frames dragged on and were not particularly entertaining. Coming out of the break, offensive execution was imperative for both teams.

The beginning of the third quarter picked up where the first half ended: slow. More slow play. More turnovers. However, things amped up at the end of the third. Chaminade went into the final eight minutes up 33-27. CCP’s last quarter of the weekend, looked the best. The team got out in transition, dunked the basketball, played together, and truly outclassed the Chicago Corliss team. Tarris Reed Jr. struck the dagger when he missed a free throw only to rebound it himself and dunk the ball. His free throw put back dunk marked the beginning of the end for the Trojans. From there it was all Red Devils. Damien Mayo had a pair of impressive dunks and the team played to its true strength: scoring in transition, getting twenty-five points in the fourth quarter alone.

Duane Posey must’ve stepped off the Memphis East bus feeling dangerous. When the Mustangs played the Red Devils Friday night, Posey finished the game with twenty-seven points and won game MVP. He scored from all over the court, shooting threes, attacking the rim, and hitting the mid-range shot. Posey was a force on defense too. His contributions helped Memphis East force 15 Chaminade turnovers. He got help from Tadarious Jacobs who scored twenty-three points. Jacobs was a force at the basket.

Chaminade struggled at the offensive end in the first half, only scoring twenty-five points. The team could never really get going in the first half, mainly due to turnover. Down ten at half, CCP focused up and went on a run to the point where the red Devils were down one, 42-41, but that was the closest they would get. Memphis East responded by ballooning the score up to 47-56.

Matteus Case did all that he could to win, sinking 5 of 9 three-point attempts and scoring 19 points. The senior guard was rocking in the second half. He came out ready to shoot the ball, and he did. His scoring kept Chaminade in the game.

Besides Case, Tarris Reed Jr. found success scoring nineteen as well. The sophomore center had plenty of touches inside the paint and finished at the rim. He played well and got the ball in the basket. Reed utilized a baby hook shot and a soft jump shot coming off strong post position to score.

The Red Devils had success and had failure during the game against Memphis East. The team’s loss propelled them to play with more intensity against Corliss. The Quincy Shootout was a fun event that drew a big crowd. Chaminade Basketball returns Friday January 31st at CBC in front of what should be a sold-out crowd.