Chaminade Rolls Past Miller Career Academy in a 40-Point Victory 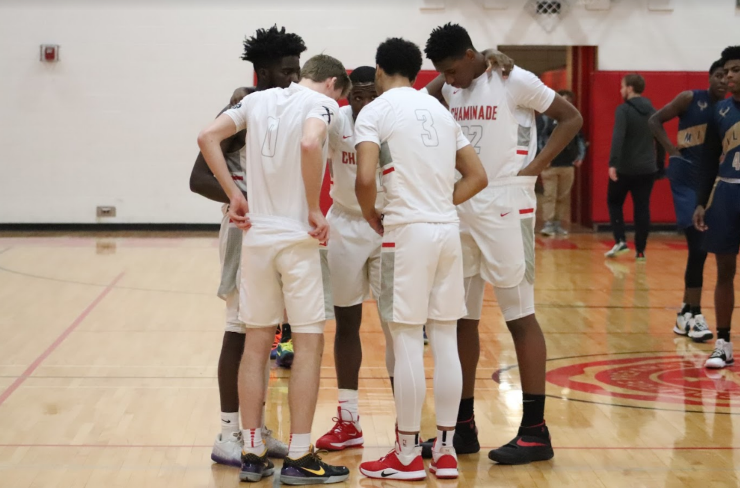 Maybe it was Damien Mayo’s one-handed slam off one foot, or Tarris Reed’s two-handed dunk where he hung on the rim for an extra couple seconds, or perhaps Reed’s jumpstep into a two-handed slam, or possibly Matteus Case’s one-handed tomahawk off of two feet, or the transition ally-oop Luke Kasubke threw down in front of the Chaminade bench.  Take your pick, because there were plenty of highlights to choose from in Chaminade’s 79-39 victory over Miller Career Academy Saturday night.

It was a successful night for the Red Devil squad, which ran up and down the court scoring basket after basket in transition. Reed and Case lead the team with 19 and 17 points. Those two were complimented by 13 from Mayo and 9 from Vickers and Kasubke.  Jaden Winfield, Nate Straughter, Jimmy Lansing, Frazier Ott, and Ryan Grimmett all contributed by scoring the basketball in the second half.

Scoring 8 points in the first quarter alone, Tarris Reed was ready to go. The sophomore center used a wide variety of post moves to twist and turn his way to sinking four fairly easy buckets in the first frame. Highlighted by a jump step into a slam dunk, Reed added five more in the second quarter to finish the first half with thirteen. He played efficiently in the second half offensively where he slammed the ball into the basket as well as going 2-2 from the free throw line. His offensive performance was accompanied by a solid game on defense where the sophomore had more than three blocks. Chaminade’s big man was able to grab offensive boards exceptionally well finishing the game with 6 offensive rebounds to go along with his 5 defensive rebounds. Miller Career Academy simply couldn’t keep up with TReed.

Senior guard Matteus Case continued his impressive senior campaign with a solid nineteen-point performance. The Canada native went 6-6 from the free throw line, hit a 3, had 2 mid-range jumpers, 2 beautiful finishes off of excellent moves at the basket, and a thundering dunk complemented with a flex at the cameras on Saturday night. He has been in a groove shooting three recently as his season average from behind the arc is 40%, an impressive feat.

Combining for 31, CCP’s other three starters all had a good night. It was Mayo’s connection to Kasubke that brought the crowd to their feet, however. On a two-on-one fast break, Kasubke shot the ball up the court to the sophomore guard who then dribbled hard to the basket and passed the ball to the far corner of the rim; from there, Kasubke grabbed it and threw the ball down through the basket. It was the beginning of the dunk contest for the Devils.

Slams from Vickers, Case, Reed, Mayo, and Winfield all followed. Beautiful finger roll layups from Case and Winfield awed the crowd. An and-one finish at the rim from sophomore guard Ryan Grimmett impressed the Red Devil starters who were watching from the sideline. A post finish from Frazier Ott riled up the three-person student section sitting behind the home bench. And a layup from center Jimmy Lansing coming from a dime of a pass from BJ Ward earned a roar and standing ovation from the home crowd. The whole varsity squad was rocking.

Chaminade goes into their last week of regular season play and it’s a busy one at that. The Devils play at 7:30 at Althoff Catholic on Wednesday night, then they travel to St. Louis University High on Friday night at 5:30 to finish off MCC play, and then Saturday night, the Senior’s celebrate their final home game against Belleville West at 6:00.