Technology and Kids: The Physical Impact 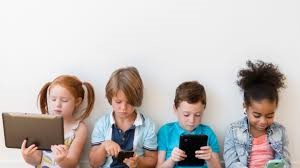 Technology is having a negative impact on the physical health of kids.

Parents are allowing children access to many forms of technology along with the endless entertainment that comes with it.  More than ever, children at the age of 10 or younger are allowed to use tablets, smartphones, consoles, television, etc.

A survey collected by the Erickson Institute stated, “Tablets and e-readers were allowed by 53 percent of parents; smartphones by 42 percent; and computers by 32 percent. Overall, only 15 percent of the parents surveyed said their young children did not have access to technology in the home, and this differed by age: 25 percent of children under age 3, and 8 percent of children ages 3 to 5.”

Parental consent for using technology is becoming more common, but this is not the issue…the issue is the amount of time a child is allowed to use the device/s per day.

“Screen Time” is a term that refers to the time a person has spent using or being in front of a screen.
“Screen time is sedentary activity, meaning you are being physically inactive while sitting down. Very little energy is used during screen time,” Said Neil K. Kaneshiro, MD, MHA.

When put into the perspective of the child it easier to understand the recent decrease of physical activity of the youth. If your parents give you permission to use the family’s devices or maybe even your own, are you going to go outside and play?

A lab at Seattle’s Children Research Institute found “By age 2 , kids are spending as much as three hours each day on a screen. That far exceeds the American Academy of Pediatrics’ guidelines for how much screen time is age-appropriate.”

Three hours a day?… Most children are awake for 10 or 12 hours a day, this means they are spending almost a quarter of their day in front of a device

“three hours each day” is cutting down the amount of time children have to exercise and play. The less a child gets outside, the more susceptible he/she is to weight gain.

The study CDC that Patel mentions points out the influence that the technological surge of the late 1990s and 2000s had on childhood obesity. The arrival of the XBOX, PlayStation, GameCube, and other gaming system in the late 1990s and early 2000s brought a surge in obesity with it.

While going outside is a great way to increase activity in children, being outdoors in itself has many health benefits.

“Spending time outdoors has a huge number of positive effects on the body — it provides you with exposure to sunlight, which supplies your body with Vitamin D. This helps to fight infections and keep your skin healthy. Additionally, regular exposure to sunlight helps to keep your sleep cycle regular by influencing the body’s production of melatonin,” wrote Patel.

Simply getting outside,  provides many health benefits that strengthen child development.

There are real time repercussions to the technology that children use.

“Recent research has shown screens from devices such as tablets and smart phones emit harmful blue light that can cause headaches, eye strain and irritated eyes for children,” Explained Patel

These blue rays have also been known for causing insomnia in children.

This article points out the thing’s technology takes away from childhood development, but I do think that there are many positive effects.

Children can use technology as a learning device and further their knowledge of prerequisite of day school; the alphabet, learning to read, pronunciation, addition, and subtraction, etc.

My message behind this article is that technology is a great tool we have at our disposal, with that being said it also can be used in the wrong way very easily.

Children will be influenced to technology, there is no doubt about it. Teaching children how to use technology with moderation and appropriately, is how the issue begins to get fixed.