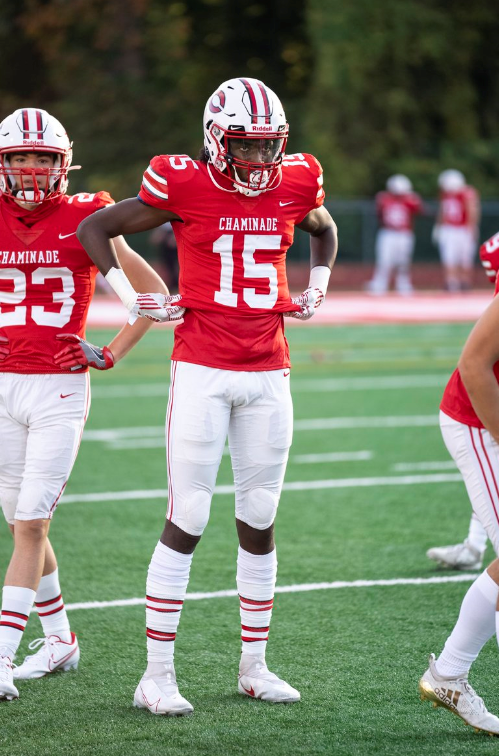 After nearly 4 and a half months of uncertainty,  Chaminade was officially cleared to play football early on Thursday morning by County Executive Sam Page.

Coach Torrey didn’t waste anytime and got his Red Devils back on the field the very next day.  He knew that he had work to do.  Chaminade was matched up against the Vianney Golden Griffins for the first game of the season, and this rival conference matchup was a fantastic way to christen the COVID season.

The Griffins came into the game 0-1 after a 31-7 loss to St. Dominic. Coming off the loss, their star senior Cannen Barcom was a little banged up after getting injured in the first quarter against St. Dominic.

On the other side, Chaminade was at the disadvantage of having no gameplay and little-to-no contact prior to Friday’s game. This showed little to no effect for the Red Devils, as they came out firing from the get-go.  Chaminade scored two touchdowns in the first quarter, and the score only got more lopsided after that.

The Red Devils prepare for their upcoming game against Trinity Catholic, which should be much more of a test for Chaminade than their last matchup.

Amar Johnson continued his scoring in the second with a 2-yard touchdown rush. (21 – 0 CCP)

Markus Marshall plowed through the goal-line with a 2-yard touchdown rush. (35 – 0 CCP)

Putting the cherry on top, Johnson rushes for his fourth, I repeat fourth, touchdown on the night. (41 – 0 CCP)