Chaminade’s “Comedy of Errors” in Minecraft: A Reflective 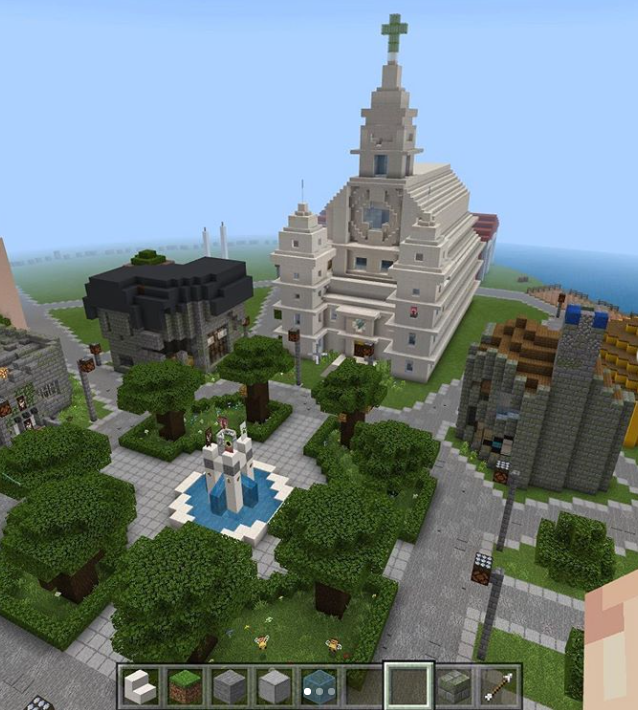 Chaminade’s Drama department has been the envy of surrounding schools for years — especially since the Skip Viragh Center was completed in 2011 — with dozens of hopeful actors auditioning from around St. Louis every time a Chaminade play is announced. Some have said that though our theater is beautiful and the shows we produce are phenomenal, the productions play second fiddle to the theater community. Under the leadership of Mr. Robert Grumich and Mrs. Susie Lawrence, Chaminade students and students from other schools alike were gearing up for a great year of theater.

Theater, as you are likely aware, requires members of the cast to be on a stage together, acting, working, singing and dancing as one tight-nit unit in order for a production to come to fruition. The question comes to mind, with the unfortunate pandemic we are in, how does one have theater without being in a theater?

In order to make it work, the theater department need to adapt significantly. Fortunately, adaptation and change are a crucial part of the Characteristics of Marianist Education, which the Chaminade family takes to heart. Taking a note out of the oft-referenced book of virtual learning, Mrs. Lawrence saw that the only way to have students meet often enough to produce a play was through Zoom.

All of the regular participants in Chaminade theater were thrilled to hear that something was going to happen, as the common fear was that the virus was shutting down nearly all extracurriculars indefinitely. As a middle-school denizen, Mrs. Lawrence saw the potential of Minecraft: Education Edition as both a learning tool and an artistic medium. Looking at the various options, Shakesphere’s A Comedy of Errors seemed like the best choice, as it is short, witty, and doable with a small cast.

The play would be performed remotely, with the actors being at home and controlling their own avatar characters in the Minecraft world. The whole ordeal would be spliced together by a third-party software and then broadcast live through YouTube. It would be tough to juggle all at once, but the Chaminade family could do it.

Preparations began immediately. A crew of “builders” was rounded up and set to work converting an endless field of flat grass blocks into a seaside town in Greece, which would serve as the set. Blueprints for the virtual buildings were drawn up by the Skip’s woodworkers and set designers, and the building crew of mostly middle-schoolers and freshman did their best to recreate their artistic vision. Structures included a massive cathedral to serve as an abbey, a prison, houses, docks and warehouses, giant ships, and — purely for the amusement of the crew — a Starbucks. They even rigged a ship to blow up as part of Act 1 using TNT blocks.

Once the set was assembled, the cast was gathered and things started to pick up. Despite being entire virtual, play practices occurred similarly to every other year. There was a practice nearly every school day in September, with different cast being called each time depending on which part of the show was being rehearsed. However, as the play progressed, various problems began to rear their heads.

Mr. Jim Robert, the Technical Director, had to ruled out Zoom as a viable software through which the production could be produced, as the video was fuzzy and the audio was often choppy. The cast moved production to Microsoft Office Meetings, but that software became overloaded and laggy from the large number of simultaneous video feeds. The crew switched to a combination of Skype and Meetings, and then had the audio play through Discord, an online voice and text chat room service often used for gaming. Even though it was admittedly hodge-podge, it still worked, and opening night was fast approaching.

Audience members would pay the $10 admission fee to receive a link to the private YouTube channel to watch the show live. Or at least that was how it was supposed to go. As it happened, the night of the final dress rehearsal, nearly every program that was intended to be used crashed simultaneously, overloading the laptop which hosted the Minecraft world and shutting all practice down for about 2 hours. But, as the saying goes, “the show must go on.”

On the night that was supposed to be opening night, the actors worked through the play and recorded the production. The finished recording was then released the next night, after Mr. Jim and the videographers edited it. So, in the end the “live” show wasn’t truly live, but at least the show was finished, and people could watch it and see all of the hard work and dedication put in by Chaminade staff and students. The full production can be found on YouTube here.

One might wonder if this show will be setting the tone for the rest of the year’s productions. The answer to that is: yes and no. Yes, precautions against the Coronavirus have been put in place, complete with some virtual rehearsals and small cast sizes. But no, productions will not be taking place in Minecraft as they were previously, and many rehearsals and the final production will be performed live at our beautiful Skip Viragh Center. In order to allow the most people to participate in the larger productions as possible, Chaminade will be hosting two large plays this year: “The Adding Machine” by Elmer Rice and “Oedipus Rex” by Sophocles.  Similar to the “Comedy of Errors” production, some of the characters in “The Adding Machine” will be recorded and displayed virtually, though on physical backdrops on the stage, live in the Skip.

All in all, the drama department’s continued flexibility in these difficult times is a prime example of Chaminade’s policy of Adaptation and Change. Like a willow in a hurricane, as the world rushes all around us, so must we bend to weather to storm.