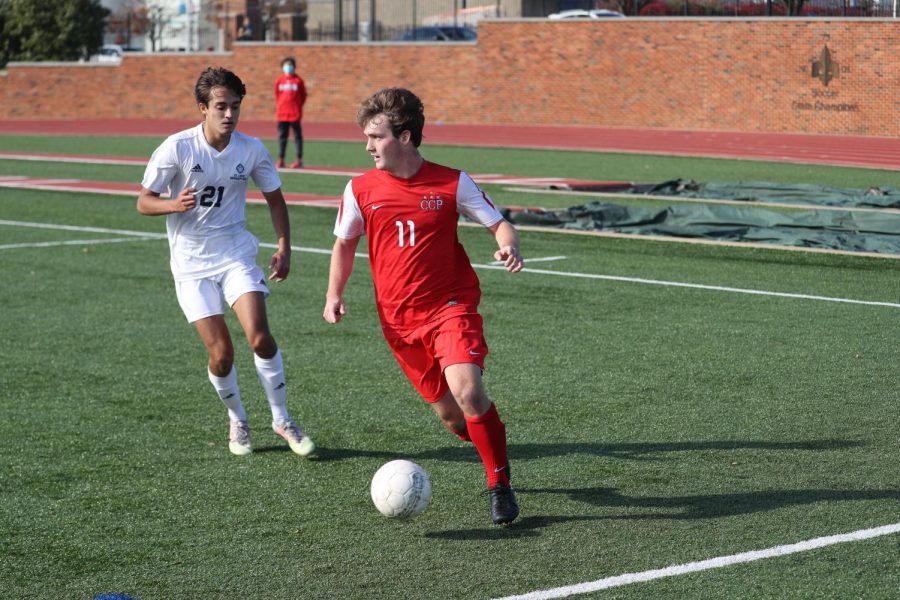 The Chaminade Red Devils took on MCC rival SLUH to open their 2020 playoff campaign on Saturday without Vader and Coach Mo, but rallied to BEAT SLUH on a last-second header from Aidan Houseworth.

The game started out with the Red Devils playing into the wind. This made it very difficult for them to get the ball past the SLUH defense and very hard to get opportunities on goal because the wind kept pushing the ball back. Chaminade’s defense did a phenomenal job though and was able to defend SLUH perfectly even with the wind in their face.

When the score was still knotted at zero to start the second half, Coach Sartori and the players new that they had already mentally one. SLUH couldn’t get much offensive action even with the wind helping them. This sparked a large amount of momentum in the Red Devils who came out of the second half blazing.

Chaminade was clearly the better team in the second half but could still not put the ball in the net. With 30-seconds left to play it seemed as if this one would be going to overtime; however, Chaminade got a corner kick.

With time running down, Senior Evan Browne ran up the field, lined the ball up, and hit the ball beautifully into the box. Sophomore Aidan Houseworth leaped into the air and put his head on the ball and placed it perfectly into the top left corner. Chaminade’s players and fans erupted as the ball went in with 10-seconds remaining on the score board.

The goal lifted the Red Devils to victory and pushed them past SLUH and into the district Championship for the second year in a row. Chaminade will play Kirkwood Tuesday at 2:30 to try and capture that District title that eluded them last year.