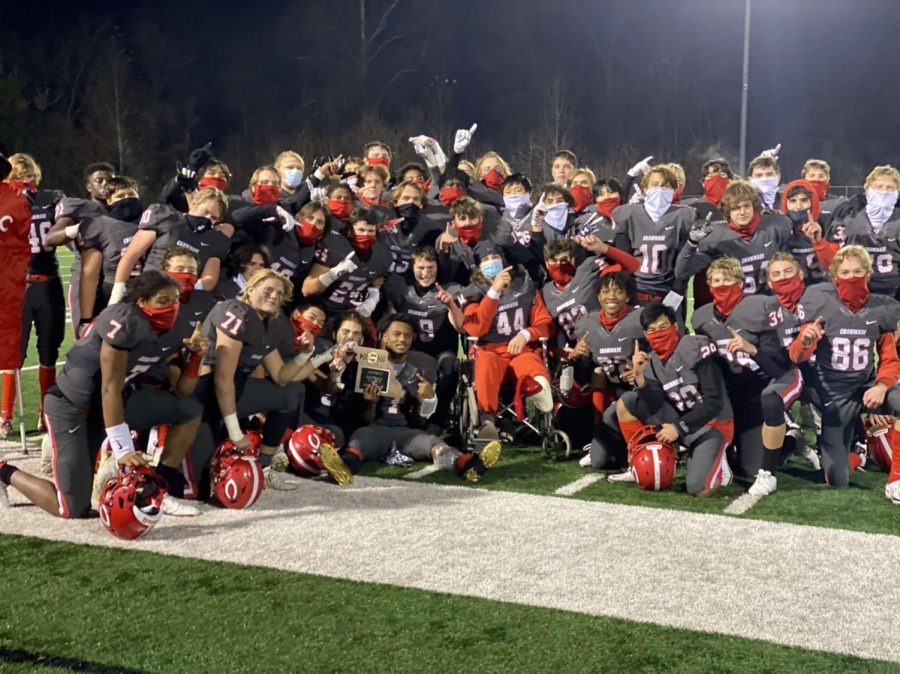 The team having a great time

The Red Devils notched their second consecutive district championship in two years with a 57-14 steamroll victory over the Parkway West Longhorns.  Chaminade will host Jackson next week for the state quarterfinal.

Offensively, Chaminade dominated. The Red Devils totaled 502 all-purpose yards, rushing for 416 and throwing for an additional 86.  This seven-touchdown performance proved to be the offense’s best showing thus far.

The running game has been Coach Torrey’s bread and butter all season, and it continued to be this game. Amar Johnson led the pack, tacking on 181 yards and 3 rushing touchdowns. Cam Epps was a close second, totaling 168 yards and 1 touchdown.  Epps rushed for 100 yards in the first quarter alone.

Chaminade super-Sophomore Peter Fessler earned himself some notoriety on Friday. Fessler took a scoop-and-score to the house after a botched backwards pass by Parkway West on kickoff.

The Red Devil not only got to sing their fight song after the game, but also got to ring the Victory Bell. Arguably the best victory celebration west of the Mississippi, the bell made its first appearance of the season.

Chaminade looks ahead to their notable opponent Jackson.

CCP RB Amar Johnson hauls in not his 1st, not his 2nd, not his 3rd, but FOURTH touchdown of the half off a screen pass from QB Cam Epps (27-7 CCP)

CCP’s Peter Fessler recovers a muffed backwards pass, and brings it in for a touchdown before the half (33-7 CCP)