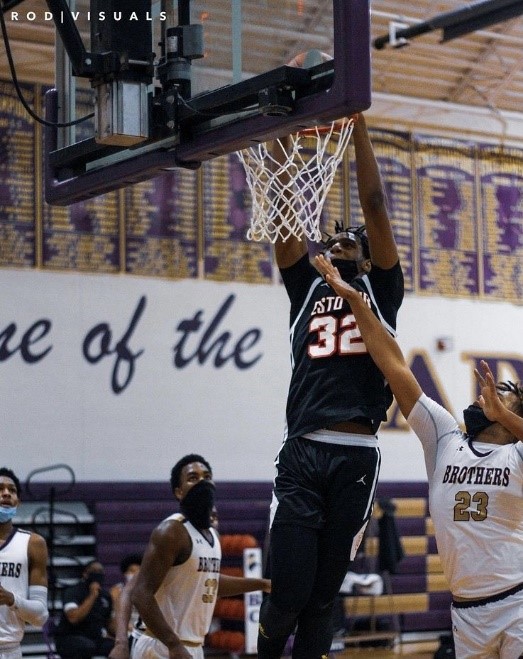 On Friday Night, the Chaminade Basketball team was able to accomplish something they had not done in 3 years: defeat CBC. Since 2018, the Cadets have been a perpetual thorn in the Red Devil’s side. Fortunately for this year’s squad, CBC is now the team looking up the MCC rankings where Chaminade sits with a conference record of 3-0.

Tarris Reed won the tip off and gave Chaminade their first possession of the night. The ball was quick to change hands, however, as BJ Ward charged into a Cadet defender turning the ball over. CBC capitalized on this mistake as Chevalier Brenson beat Filip Sinobad off the dribble on the following possession and laid the ball up to give CBub a 2-0 lead. Larry Hughes Jr. added to this lead with a mid-range jump shot after stealing the ball on a CCP inbounds.

Chaminade was finally able to get on the scoreboard thanks to a Tarris Reed layup coming off a nifty post move. The big man followed this up with a block of Hughes’ jump shot at the other end leading to a Damien Mayo transition euro step, 4-4. Pullup jump shots by CBC’s point guard Robert Martin and Chaminade’s Filip Sinobad kept the score even, 6-6. After a Tarris Reed miss, Damien Mayo leaped high in the air to put the ball in the basket matching a Robert Martin layup and free throw, 8-9. It was Nate Straughter’s three pointer and Mayo’s transition floater that invoked a timeout from CBC’s coach Justin Tatum with 1:26 left in the 1st quarter.

Out of the timeout, Chaminade forced a turnover, and Walter Straughter sunk a three of his own propelling CCP to a 6-point lead. One final Robert Martin mid-range jump shot and a Mikhail Abdul-Hamid dunk ended the first frame with the Red Devils on top, 16-13.

After the break, Filip Sinobad sent a beautiful no-look pass right to the hands of Reed who hit a baseline mid-range jump shot, scoring the first points of the second quarter. Both teams then made highlights plays as Justus Johnson splashed a three pointer and Reed slammed down a dunk on the other end, 20-16. CBC then went on a 10-4 run, ending with a Larry Hughes Jr. layup which compelled Coach Frank Bennett to call timeout and regroup with his guys.

To end the first half, Robert Martin sank a mid-range jumper and a layup while Chevalier Brenson had a layup of his own. Nilavan Daniels got a corner three pointer to fall, BJ Ward laid the ball in over the Cadet D, and Reed slammed down another thunderous dunk to score CCP’s last 7 of the second quarter. After Larry Hughes Jr. air-balled a three at the buzzer, the scoreboard read:  CBC 32 CCP 31

During the intermission, Coach Bennett told his guys, “We got to clean up the mental mistakes on both ends. If we do that, we’re in good shape… You gotta make the conscious decision to play every single possession… Play with some poise and play with some togetherness.”

Eerily similar to the first score of the game, Chevalier Brenson beat Filip Sinobad off the dribble and was able to lay the ball in. Tarris Reed Jr. responded with a spinning layup, but CBC then went on a 7-2 run highlighted by a Robert Martin steal and layup. The Red Devils were able to slow the game down with mid-range jumpers by Damien Mayo and BJ Ward bringing the score to 39-42 in favor of the home team.

At the 2:30 mark of the third quarter, Coach Tatum called timeout and both teams went to their respective sidelines. Quarter number three ended with two free throws by CBC’s Marshawn Sayles as well as Tarris Reed and a mid-range floater by BJ Ward. Entering the final eight minutes of Friday’s matchup, the Cadets lead 46-43.

Chevalier Brenson had a chance to reclaim the lead for the Cadets but the senior went 1 for 2 at the line, tying the game 51-51. Back-to-back Mayo mid-jumpers were pivotal moments late in the game as the Red Devils grabbed a four point lead.

Despite a massive Damien Mayo block, CBC was able to bring their deficit back to two with a Larry Hughes Jr. dunk. With 2:36 left in the game and the score sitting at 55-53, Coach Tatum called timeout. A 1 for 2 trip at the free throw line by Damien Mayo and a missed free throw by Marshawn Sayles lead to a Chaminade timeout. CCP then tried to inbound the basketball, but CBC’s stingy defense prevented anyone from getting open and Coach Bennett called a timeout to keep his team from getting called with a 5 second violation.

Once the Red Devils were able to get the ball into play, Filip Sinobad was immediately fouled and sent to the charity strike. Unfortunately, the Serbian Junior missed his free throw and Chevalier Brenson was fouled on the rebound. Luckily for the Nade, Brenson went 1 for 2, with the second shot going too strong off the left side of the backboard and landing into the outstretched hands of Tarris Reed.

Damien Mayo received the outlet pass from the big man and hit a transition layup. Chaminade led 58-54. On CBC’s following possession, CCP forced a pivotal stop and immediately called timeout. Coach Bennett drew up a beautiful play to get BJ Ward open who was then fouled and sent to the free throw line. Chaminade’s sophomore point guard delivered when it mattered most and sent the score to 60-54. CBC’s point guard, Robert Martin, responded with a layup of his own.

Coming out of a CBC timeout, Tarris Reed received the inbounds pass, was fouled, and made both of his free throws. Marshawn Sayles sunk a layup, but with 2.8 seconds left on the clock, CCP led 62-58. All the Red Devils had to do was safely pass the ball into play and the game would be over. Damien Mayo delivered. The buzzer sounded. Chaminade beat CBC 62-58.