Sean Green Named to the Soccer All American Team 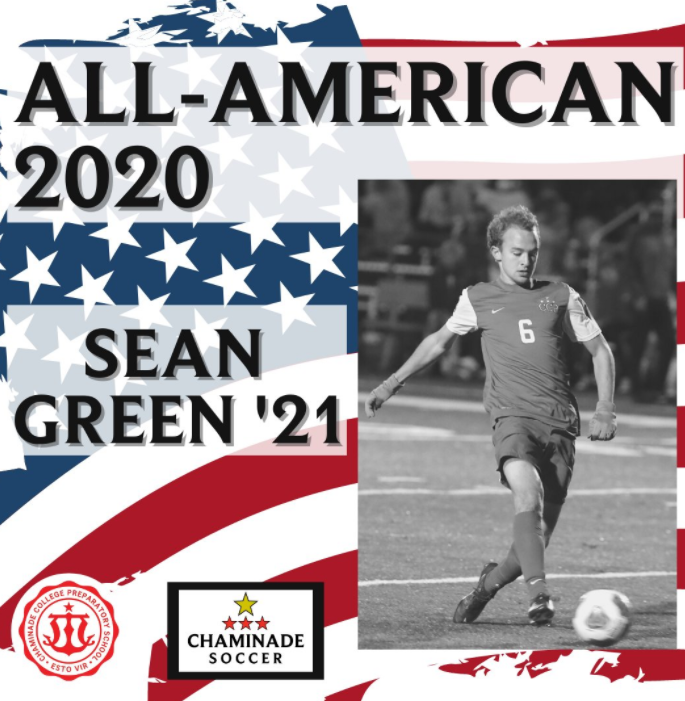 On December 15, 2020, Sean Green was named an All-American by the United Soccer Coaches Association. Green became the sixth All-American in Chaminade school history due to his tremendous play and leadership on the field.

The award came as a surprise to Green, who says, “I was standing in my kitchen after eating lunch, when my phone started going off with a lot of text messages. I was shocked because I was unaware of the news or that it even was a possibility.”

Before receiving this illustrious award, Sean had already been named to the All-State, All-Region, and First Team All-Conference lists. “I have been fortunate to be recognized for various awards throughout my High School career but being named an All-American is by far the highest honor. Although it was not the final goal that I had in mind, I am still very thankful”, says Green. The “final goal” that Sean mentions was winning a state championship. He says, “My goal from the second I arrived at Chaminade was to bring back another title to the program.” Although he was unable to pull it off, Sean was still proud of what the team was able to accomplish throughout the years.

His sophomore year, the Varsity team went 20-6, and had a deep playoff run to the Sectionals before being knocked out by that year’s championship team, CBC. During Green’s Junior year, the team went 11-10, but despite the ten losses, were still able to win the conference. They were yet again eliminated by that year’s champions, the Desmet Spartans. His senior year, the team saw more success by winning the conference again, and they made it all the way to the Quarterfinals before being eliminated by that year’s champion, the Jackson Indians. Green says, “It was tough to get eliminated each year by the team that ended up winning it all, but we kept our heads held high, as we knew we lost to the best.”

When asked about who has helped him most along the way, Green did not hesitate to mention all the teammates he has had while at Chaminade. He says, “The players that I have played with over the last 3-4 years at Chaminade have been a significant help in accomplishing this goal. Although we never won a state title, we have had successful seasons with deep playoff runs. I will always be grateful for the great times I had with my Chaminade teammates both on and off the field.” Sean also mentioned how beneficial the coaches were during his Chaminade career. “I would not be the player or person I am today if it wasn’t for Vader, Sartori, and Mo. They put their faith in me from my very first Varsity game sophomore year, and I will always be thankful for the opportunity they gave me,” says Green.

Although Sean is still undecided on where he will attend college, he plans on playing soccer somewhere. With the amount of accolades and success he has experienced throughout the years, I have no doubt he will end up somewhere great. It was an honor to play with Sean for two years on the Varsity team, and I will never forget the impact he made on our team.